The house located at 19 Maryland Avenue was begun in 1774 by the gentleman planter Matthias Hammond. Ardently favoring the cause for freedom, Hammond was elected to the Maryland government in 1773. At the same time, he had begun working with renowned architect William Buckland on plans for a new, elegant townhouse in the most fashionable area of Annapolis.

Buckland was no ordinary builder. He immigrated to the colonies in 1755 as an indentured servant to George Mason of Virginia. Mason commissioned Buckland to work on his home, a seemingly modest site called Gunston Hall. The young architect is credited with introducing a variety of designs into mainstream architecture in the colonies. After several successful commissions in Virginia, Buckland ventured to Annapolis, where his hand can be seen at the Chase-Lloyd House. The crowning jewel of Buckland’s career, however, was the house he designed for Matthias Hammond. This house was the only one of his many commissions that Buckland designed and executed in its entirety. Unfortunately, Buckland died before the house was finished.

Ironically, the man for whom Buckland erected this masterpiece never lived at the house. Instead, Hammond was living at his plantation in Gambrills, Maryland by the 1780s. In the waning years of the 18th century, the house was rented by many a well-known Annapolitan, including Judge Jeremiah Townley Chase, a one-time mayor of the city. In the 19th century, the elegant mansion was home to the Pinkney and then the Loockerman families. In an uncanny twist of fate, William Buckland’s great-grandson William Harwood married into the Loockerman family, thereby bringing the Buckland clan into the house. William Harwood’s progeny lived at the Hammond-Harwood House until the last surviving member of the lineage died in 1924.

Through the Civil War and World War I, the house remained an enduring fixture in Maryland’s capital city. After the death of Hester Ann Harwood in the 1924, the house seemed destined to become a memory. Fighting off bulldozers, St. John’s College purchased the site in 1926 and used it for their decorative arts program, the first of its kind in the country. The economic woes of the 1930s, however, forced the College to search for new owners. Finally, in 1940, the Hammond-Harwood House was purchased by the newly formed Hammond-Harwood House Association. Since 1940, the site has served thousands of visitors and has become a landmark of colonial architecture. 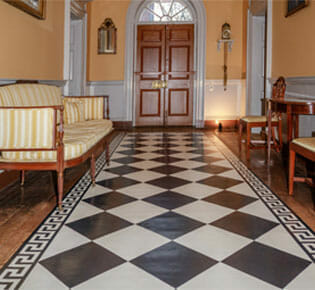