By appointment on weekdays

There will be no field trips on February and March 2022.

The Hammond-Harwood House offers educational programs for public, private and home-schooled children of all ages. Programs can be adapted for other children's groups, just ask! 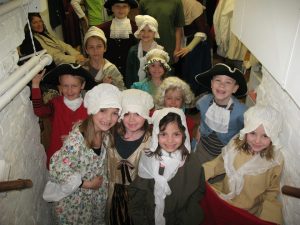 This program is designed for the littlest historians, ranging in age from 5 to 7 years old.  Children will travel back in time to the 17th and 18th century and look at life then and compare it to life now.

The program is divided into three 30-minute sessions:

Session I:  Herb Garden and Kitchen

We start off in the herb garden and look at plants that had many medicinal purposes.  Can our little historians think of items today that have a similar use?  We will then visit the kitchen and find what is different and the same about this room.

Session II: The Interior of the House

Here, children will visit several rooms including the dining room and the ballroom.  What differences can be found in the purpose of these rooms then and now? Are there objects in these rooms that we still have today?  Do modern homes even have a ballroom?

In this session, children will learn about colonial clothes.    Then they with dress up in colonial costumes and compare these clothes with dress today.  Parents and teachers may want to take their pictures using cell phones or cameras instead of painting a portrait.

This program is designed for young historians,  from 8 to 10 years old.  Children will explore the three social classes associated with the Hammond-Harwood House: the enslaved servants, the middling (or middle class) class including artisans or craftsmen, and the gentry class.

The 90-minute program is divided into two 45-minute sessions.

Session I.  The Main House

Students will pretend to be guests visiting the Hammond Harwood House.  With their invitation in hand, they are invited into the lower passage and then to the Dining Room. In the Dining Room they will learn the etiquette of 18th century dining and why this meal took anywhere from 2 to 3 hours.  They will also learn about the artisans whose work is represented in this room – William Buckland, architect; John Shaw, cabinetmaker; and Charles Willson Peale, portrait painter.

Students will then move to the Ballroom, an elegant room in the 18th century where not only dancing went on but courting as well.  Students may not be familiar with the latter term but we will explain its meaning.  They then will learn a dance called The Grand March, which was the introduction to a formal ball in the 18th and 19th centuries.  Finally, they will hear the music of two instruments in the room, the pianoforte, and the violin.

Session II:  The Kitchen and the Classroom

Students will go into the Kitchen from the garden. There they will learn about the life of the enslaved people and indentured servants.  They will hear about the schedule of the cook and her 10 to 12 hour work day.  Although the role of the cook was probably the most difficult one, the other servants had to be on duty just as long.

The students will then move to the classroom and learn about the clothes worn in the 18th and 19th century by the enslaved people, the middle class or craftsmen, and the gentry or upper-class.  They will play a Bingo Game called GARM (for Garment).  Finally, they will learn how to set a table as a servant would have done in the 19th century.

This program is designed for children in grades 6 through 8.  This ninety-minute tour will take them through a day in the life of Frances Loockerman, who occupied the Hammond-Harwood House with her family beginning in 1811. Students will be introduced to Frances and Richard Loockerman by viewing their miniature portraits in the entry-way to the house.

The day will begin in the kitchen of the Hammond-Harwood House where we will hear about three enslaved people who served the Loockermans:  Mary Matthews, Matilda Matthews, and Juliet. While the servants prepare for the day, the students will adjourn to the classroom or “breakfast” room.

Students will learn how to set a table for breakfast as the servants would have done. Then, the students, playing the roles of Richard and Frances’ children, will  learn proper behavior at the table, including “not talking when the mouth is full” and “not making unpleasant sounds” while eating.

After “breakfast” we will then go into the garden and be introduced to the boxwood that Frances planted in the shape of a heart in 1825. As we walk around, we will see where the stables, orchard, vegetable garden, spring house, and outhouse used to be. A visit to the herb garden will show students popular herbs of the day and their uses. Finally, students will play period games including “London Bridge is Falling Down.”

Back in the house the students will go to the Northeast Bed Chamber where Frances would spend many hours reading, sewing, and writing letters. They will listen to one letter that Frances wrote to her daughter Hester in 1845.

Finally, they will visit the Ballroom where Frances and Richard spent time entertaining guests with music and dance.  Some students will play the role of the Loockerman children practicing the violin and the piano forte.  All students will participate in the Grand March, a dance movement that was popular during the early 19th century.  The tour ends with an art activity in the classroom.

Primary sources provide unique evidence about a person, an object, an event, or a work of art. In this ninety-minute session, high school students will examine the life of William Buckland, architect of the Hammond-Harwood House. They will look at mathematical tools which he may have owned, a portrait of William Buckland in the dining room, and the architectural details of the house. Much of Buckland’s life remains a mystery, including where he died and his burial site. However, the primary sources used in the program will help students learn more about the man who has been called one of the great colonial architects. Even Thomas Jefferson admired Buckland’s work on the Hammond-Harwood House and wanted to incorporate the semi-octagonal bays of the wings into his home at Monticello. Finally, students will have an opportunity to paint an outline of the front door on watercolor paper.

Request a field trip at least three weeks before your desired date using the form below. Your reservation is not finalized until you receive a confirmation via email.