Winter Flowers from Around the World

To carry on an Annapolis tradition, local garden clubs have decorated Hammond-Harwood House for the holiday season! This year’s holiday displays are inspired by flowers that bloom around the world in winter; due to the pandemic, the museum is closed to the public but the decorated rooms are featured online. This theme is in celebration of our exhibition Decadent Décor: Global Imports in an Early American Port City, which highlights early Annapolis consumers’ furnishings from around the globe. Included are items such as British silver, Chinese pottery, French clocks, and mahogany from the Caribbean. Enjoy! 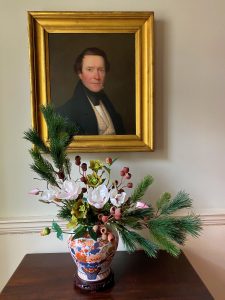 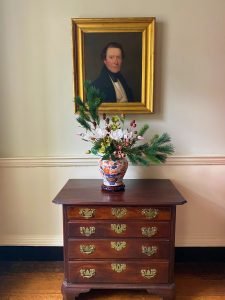 For the Best Bedroom floral design, I was inspired by the colors of the room and an Oriental influence. My son is working in South Korea and I study Ikebana so this is my story.
South Korean culture is strongly influenced by years of rule by Japan, and prior to Japan, China. In the less populated areas of South Korea, Buddhist temples dating as far back as the 1600’s are still standing and used today. But approximately 25% of the population practices Christianity and December 25 is a national holiday. Communities decorate with Christmas trees and families exchange gifts much as we do in America.
The climate is very similar to ours so the plant materials used in this design may also be found locally. The pine tree is iconic of the Japanese New Year, as a symbol of rebirth, renewal, and a bright (hopeful) future. The Hellebore is also known as a Christmas rose and is native to Europe and Asia. It symbolizes serenity, tranquility and peace. The magnolias are considered as one of the first flowering plants that ever evolved on Earth. One of the most popular magnolia flower meaning is nobility. There was a tradition of the Chinese emperor to give magnolia to an honored person as a sign of respect. Also, in ancient China, it symbolized the clean and pure spirit. While in Japan, the magnolia flower was a symbol of nobility and respect for nature. 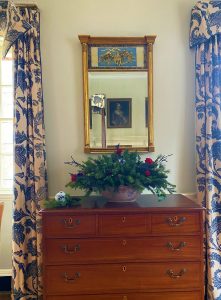 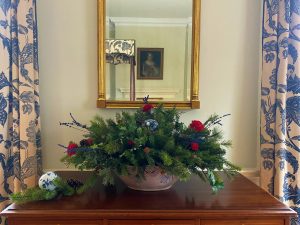 The greens used in the arrangement are representative of those that would have graced Hammond Harwood House in the 1700s — Pine, Cedar and Spruce, with Holly, Ivy and Lavender from the gardens of the estate. Since the arrangement was to be placed in the Master Bedroom, I used blue and white ceramic reproductions of English “Parlor Balls” with patterns that echo those of the bed hangings. The ball at the base of the arrangement incorporates an exact copy of the flower used in the pattern of the bed’s canopy. Since the decorations this year were to incorporate an international flair, I used an Italian bowl decorated in cream and blue that complements the English blue and white toile decorating the bedroom. The selections of English Winter Rose, Holly and Ivy add to the multicultural theme and reflect the cultural heritage of the family. 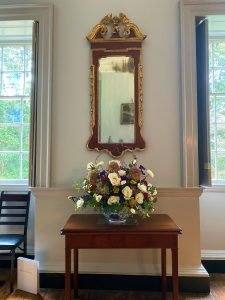 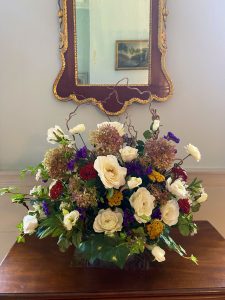 Breakfast Room
This cheerful, traditional arrangement is a combination of silk and dried flowers. The roses provide classic beauty and the hydrangeas and yarrow are flowers that are showy in the summer and easily dried for use in the winter. The container is reminiscent of Chinese export pottery featured in the exhibition, which compliments the collection in the room. 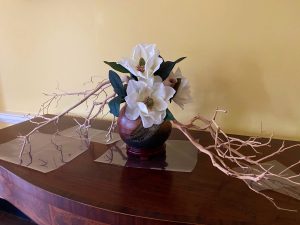 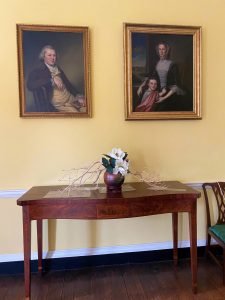 A minimalistic Ikebana arrangement providing a contrast to the grandeur and age of the ballroom. I am a student of the Sogetsu School of Ikebana.
Hopefully, I have demonstrated this with the use of Magnolia Grandiflora Maryland and weathered wood.
I used a bronze coloured Japanese ceramic container that has a fossilized looking indentation and it is echoed by wood peaking through near the magnolia flower. 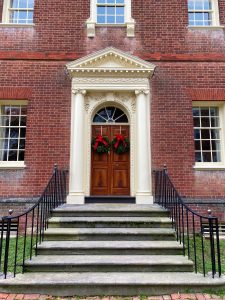 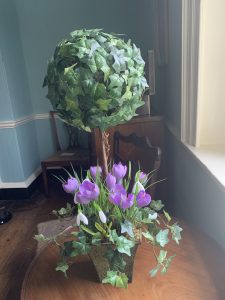 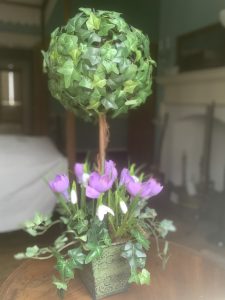 Arrangements by members of District II Federated Garden Club of Maryland.
A nostalgic Topiary made by a volunteer of Hammond Harwood House 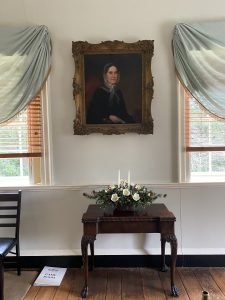 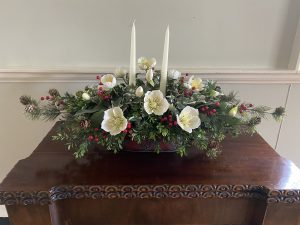 Game Room
All Flowers and greenery in this arrangement are grown in the Hammond Harwood House Garden.
Boxwood, Holly, Ivy, Pine and Hellebores. 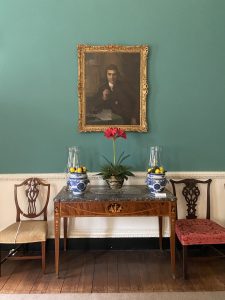 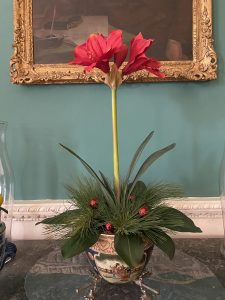 Posted on Dec 4, 2020 in Enjoyment, Events, Uncategorized by Hammond-Harwood House