Bed in the Chippendale Style

Beds in the 18th century bore witness to the most important events in family life–from birth to death. This bed is no exception, and it has an interesting story to tell.

Brian Philpot Jr. (1756-1812) was the original owner of this bed. A merchant of English ancestry, he was a prominent Baltimore citizen and served in the American Revolution. Brian’s father, Brian Philpot Sr., came from Stamford, England, in 1734 with an authorization from King George III to establish his mercantile business. He gained great success. Brian Jr. continued his father’s interests and also established a robust merchant business. Philpot Street in Baltimore is named after him. Brian Jr. married Elizabeth Johnson and the pair had six children. Their country house was known as Stamford; it is currently the club house for the Green Spring Valley Hounds and Hunt Club.

This elaborately carved bed could have been at Stamford in the late 18th century. Maryland-made with imported mahogany, it represents a late Chippendale style with some classical motifs. The main features of the bed are the carved acanthus leaves, half rosettes, bellflower drops, and egg and dart motifs on the four elongated vase bed posts. The legs are slightly tapered with spade feet. 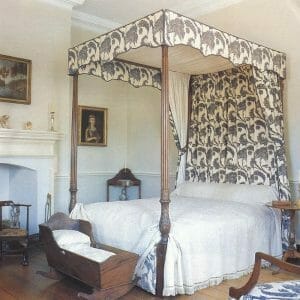 Posted on Jun 17, 2022 in Collections, Item of the Week by Hammond-Harwood House