Many Americans enjoy a cup of coffee to begin their day.

The drink has long been a part of American morning rituals and coffee’s accoutrements feature in the history of decorative art. If you lived in the early 19th century you would have seen pieces similar to this delightful coffee pot. This coffee pot’s form is affectionately known as a “Lighthouse.” The flared cylindrical body has a raised spout, double-twist handle, and domed cover. The piece has a monogram with a bird crest and the initials DJD in shield. The set also contains a creamer, teapot, and tea caddy. Annapolitans, living in a port city, had access to imported porcelain. In the late 18th century the traditional design of Chinese porcelain shifted to cater to Western clients, and custom orders like this one often included a family crest, monogram, or coat of arms. Direct American trade with China began in 1784 after the Revolutionary War, and by 1800 nearly 60 million pieces of Chinese porcelain had been imported to America.

The American public has loved coffee since the early 17th century. Initially cultivated in Ethiopia, coffee was later introduced into the plantation economy and grown mainly by enslaved labor in the Caribbean and South America by the 19th century. Coffee houses started appearing in cities across America in the 18th century. At these establishments, gentlemen, generally from the gentry class, lingered over their beverages and exchanged ideas. The Maryland Coffee House on Church Street (now Main) opened in April 1767. Owned by Cornelius and Mary Howard, this coffee house was a popular meeting place for Annapolis’ famed gentleman’s clubs like the Homony Club, which counted artist Charles Willson Peale as a member, and the quirky Lunatick Club which only met by the light of the full moon.

The popularity of coffee continued to grow as colonists rejected the tea tax and embraced the stronger stimulant of coffee. Originally these products were luxury items that only the rich could afford. However, by 1800 probate records show half of American families had some tea and or coffee equipage. Tea continued to be popular in the early 19th century as it had been in the 18th century but coffee soon surpassed tea as a beverage of choice for many Americans as they preferred the more powerful stimulant and stronger taste. By 1830 coffee was the most popular beverage. American author Samuel Griswold Goodrich wrote in 1833 that the “use of coffee in the morning and tea at night are almost universal” –which is very similar to modern culture. 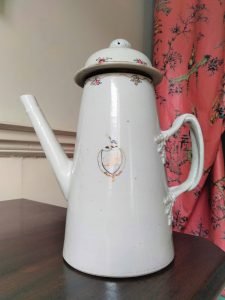 Posted on Sep 24, 2021 in Collections, Item of the Week by Hammond-Harwood House