Welcome to the sixth educational blog for the Hammond-Harwood House.  In the past we have looked at such topics as architecture, silhouettes, botanical drawings, and portrait paintings.  Today we are going to look at something we all love and share–food!

In the 1700s, the wealthy people of the Americas began to eat fancier food than they had in the past. They had servants who cooked, set their tables, and prepared large dinner parties.

Today we are going to look at what the wealthy ate at breakfast and dinner.  Lunch didn’t exist. Dinner was the major meal of the day. Supper was only a light meal and usually took place late at night.

In this activity, you are going to play three roles.  The first is that of a servant who had many jobs. One was setting the table for the family’s breakfast. That is what you are going to do. The second role is the cook.  The cook in the 18th century had a difficult life starting before the sun came up and ending very late at night. But your job as cook is going to be easy.  You are going to make dessert — with whipped cream!  Finally, you are going to be a wealthy guest who gets to eat the dessert!

We will start with breakfast.  The lady of the house wakes up her family and prepares for the day.  In the meantime, several servants would set the table for the family breakfast.  The first activity teaches you how to set a table correctly.

Directions:  These items are what you will need for this activity: napkins, a glass, fork, plate, knife, and a spoon.  Ask your parents if it is O.K. to use them. (Forks were only used for the wealthy. Spoons and knives were used primarily by the lower classes. The food was pushed with the spoon onto the blunt end of the knife and taken to mouth from the knife. Those who aspired to the higher classes purchased a few forks to show they had some extra funds to spare.)

You are the servant so you must know how to set the table correctly for breakfast.  Follow the rules below:

Use the word FORKS to help you remember how to set a table.

Going from left to right, put down the fork for the letter F.  The O stands for an “oval” or a plate.  The R means nothing.  It is just there to spell the word. K is for knife and the S is for spoon.  The glass goes above the spoon and the napkin goes to the left of the fork.

The mother or parent sits down at the table first.  Then the others are invited to sit down. Manners were very important in early America.  Don’t put your elbows on the table. Don’t talk with your mouth full. Do not interrupt someone who is talking. Don’t pick your teeth. Today we might include “Don’t look at your phone while at the table.”

This is a nursery rhyme that children would say if someone broke one of the rules.

Mable, Mable, if you are able,

Get your elbows off the table!

This is not a horse’s stable

But a first-class dining table!

Breakfast was a simple meal.  The family might have special muffins called “Good Morning, Muffins.” It is folklore that these muffins  were called that because a baker would pass by the homes and yell “Good Morning. Muffins,” indicating he had baked goods for sale.   They would also have something similar to cream of wheat, corn bread, and butter.

The family then went about their own chores until dinner came at mid-afternoon.  Dinner was the biggest meal of the day and lasted until two o’clock or later.  Often guests would be invited along with the family.  Here is a typical dining table set for dinner.

Speaking of dining tables, the Hammond-Harwood House was one of the first houses in Annapolis to have a dining table.  It was considered a sign of wealth if one had such a table. Dinner consisted of two to three courses. The first course starts with soup, is followed by fish, and then roasts such as turkey, ham, Calf’s Heads, tongues, rabbits, hares, wild fowl, venison, etc.

Toad in the Hole 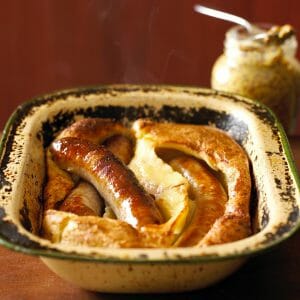 Or Pigeon Pie, served for the second course: 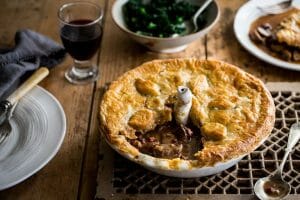 The second course consisted primarily of what were called Made Dishes [not simple roasts], such as casseroles, Veal Olives, Raised pies, ragouts, fricassees, fruit pies, plum puddings, hashes, fritters, etc. Vegetables and salads were served in the 2nd course, too.

These desserts were meant to refresh the guest after the heavy first and second courses, Here are some more strange names:

Tipsy Hedgehog (When you visit the Hammond-Harwood House this fall, you can see it in the dining room). 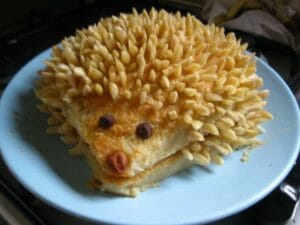 Another dessert is called Raspberry Fool (This also is found in the Hammond-House dining room). 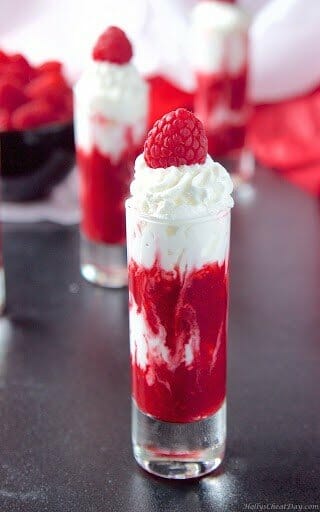 More desserts might be fresh and dried fruits, tarts, and custards. 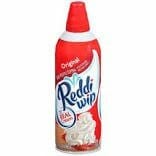 In Activity 2  you can buy a can of whipped cream.

Or you can make your own. Let’s make our own as they did back in the 18th century

You will need the following:  Heavy cream, sugar, a mason jar, and vanilla extract.

In Activity 2 you are the cook again and you are making baked apples for dessert.

Most of the preparation is the way they would have done it in the 18th century.  However, you will use an oven. Later in this lesson you will learn how 18th century cooks baked it.

You will need the following: one apple for each participant, butter, cinnamon, an apple corer, and sugar

In a bowl combine:

2 tablespoons or (to taste) of brown sugar

The following is the way they would bake it in the 17th century.  Thanks to Joyce White, food historian, for the directions, pictures, and recipe from her Taste of History.

Small items like apples would be baked in a Dutch oven. I have attached a recipe from the 1839 cookbook called The Kentucky Housewife by Lettice Bryan. The recipe calls for the apples to be placed in a pan and then cooked in an oven. I have attached pictures of the oven. You’ll see that hot coals are placed below and above to provide heat all around the food.

1839 Recipe from The Kentucky Housewife by Lettice Bryan 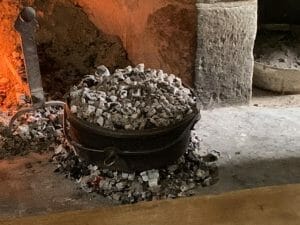 This is the best part.  You are finally a guest.  Just put a glob of whipped cream on your apple and enjoy. 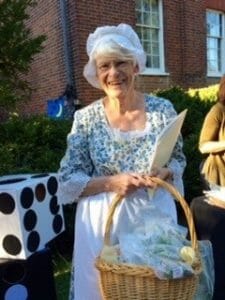 Posted on Jul 2, 2020 in Education, Reading List by Hammond-Harwood House