The Hammond-Harwood House Museum is updating the window treatments in the Game Room. With a generous donation from the Barry Walsh Memorial Fund, started by Hammond-Harwood House docent Frances Newton Harwood, this project can be accomplished. Extensive research of the variety of late 18th and early 19th century window curtains revealed some alternative options of which styles could belong in the Game Room. In addition to some background on what type of research has been conducted, there are two suggestions of early 19th century window treatments for the Game Room. Which style would you most like to see?

Window curtains came in a variety of drapery styles between the late 18th and early 19th centuries. These styles included venetian curtains, venetian blinds, festoon curtains, and spring blinds, and were hung on either Gothic or French rods. The arrangement of the drapery was dependent on the advice of a professional upholsterer as well as the personal flair of the dweller. Developments in technology also played a role in the styles of curtains over the decades. However, the purpose of the room wherein curtains were to be hung and the expense and fashionableness of textiles available was not to be underestimated as being influential in determining the style of curtain chosen. Sources for research included textual documentation, visual art, and surviving original window curtains to consider what styles of curtains would be appropriate to the interpretation of the Game Room at the Hammond-Harwood House. The decades most prominent in the research were the 1800s-1820s because this is the era of the interpretation of the house. However, that research is contextualized by accounts from the 1760s-1790s, which provided a relevant background to the curtain styles popular in the early 19th century.

Advice from George Smith and Rudolph Ackermann, both prominent publishers in the early 19th century, for interior designers and from images of rooms with curtains, shows that it is natural to expect suggestions for correct arrangements of window curtains. The combination of the three types of sources – textual documentation, visual art, and surviving original window curtains – provides a more distinct result of which curtains would be most appropriate for the Game Room at the Hammond-Harwood House. Ackermann’s Repository of Arts boasts of numerous illustrations of drapery from the early 19th century, which provide fruitful interpretations of many of the styles of curtains fashionable for the time, including a range of textiles suitable for certain rooms. Regarding surviving curtains, the fineness of sewing is occasionally visible but they also offer a more accurate drape of the textile than drawings can depict. French rods became very popular at the end of the 18th century when they were invented and later caused other curtain styles to go out of fashion within the first few decades of the 19th century. Given their popularity at that time, they would be a viable option for the Game Room and would be a good means of suspension for dimity or other light weight cottons. Similarly, venetian blinds are exceedingly convenient and moderate light well. Given a pair of paintings depicting domestic settings with venetian blinds, the Game Room as a small sitting room or parlor is a reasonable environment for such a window treatment instead of cotton curtains on a French rod.

These curtains are made of a pale green cotton blend cloth. The valence is made from the same cloth as the curtains but is trimmed with a narrow strip of dark green velvet and finished in gold fringe. The fringe and the velvet act as a pleasing accent to this more conservative curtain style. While the valence is secured to a frame above the window, the curtains themselves hang from a French rod by brass rings fastened to the curtain by strips of cotton tape. The brass rings are controlled by two cords which hang to the right of the window. Gold silky tassels are tied to the ends of those cords. By pulling on one tassel or the other, the curtains are drawn open or closed along the French rod. The French rod is of great convenience, but the valence is not just decorative. Its purpose is to conceal the mechanism by which the curtain operates. It thereby enhances the indoor view of the window.

The French rod gained popularity at the end of the 18th century and was used well into the 19th century. By pulling the entire curtain to the side of the window, there was no concern of neatly arranging the fullness of the cloth over ornate curtain knobs. Rather, a greater symmetry was achieved by the balance of the French rod. Additionally, although there was more freedom of movement for the curtains on a French rod, the function of the curtain could easily be maintained, not only for protecting a room from sunlight and for privacy in more urban homes but also to block drafts when they seep through the windows, as emphasized in the section “Ordinances of the Bedchamber” from At Day’s Close by A. Roger Ekirch.

These blinds are made of natural wooden slats and hung together with fine cords. The front of the blinds is accented by golden jacquard tape. The swag, like a valence over the window, is made of a pale green cotton blend cloth and is trimmed in gold fringe. This swag is draped over wooden finials which are secured at either end of the frame above the window. The blinds themselves hang from this frame and are controlled by cords which loop through pulleys concealed within the frame. These cords hang to both the right and the left of the window. The cords to the right, which end in gold silky tassels, pull the blinds up and out of view or let the blinds down to cover the glass, while the cord to the left, which is merely looped through a wooden channel, open and close the slats of the blinds. When the blinds are down, the cords to the right can hang loose, but when the blinds are up, they are secured around a wooden curtain knob to prevent them from sliding down. The venetian blinds are highly versatile and cater well to needs pertaining to sunlight allowances and privacy.

Venetian blinds were not as grand as silk damask window treatments; however, that did not preclude their use, especially in smaller, less formal settings. Also, when lighting in rooms was controlled so carefully, nothing was more suitable than venetian blinds. Susanna Whatman wrote in her book on housekeeping from 1776 that many duties of the house maid consisted of attention to window treatments, whether for keeping them clean or managing them as the sunlight shifted across a room. “Venetian blinds. When let down to pull the longest string to turn or close them quite. Otherwise the sun will come through the laths.” (Housekeeping, pg. 38)

Submit a vote for your preferred curtain style! Click Here to vote

Posted on Feb 1, 2019 in Collections by Rachel Lovett 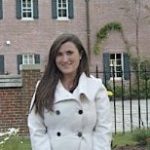 Rachel Lovett is our Curator and Assistant Director at the museum. Rachel holds a Master’s degree from the Harvard Museum Studies Program and a bachelor’s degree in history from Endicott College in Beverly, Massachusetts where she was chosen as the 2010 Governor John Endicott Memorial Scholar.
Read More
Scroll to Top