This pair of elegant side chairs was once a set of six pieces original to the Hammond-Harwood House.

The classical vase shaped splat is plain and almost flat with a minimal concave contour. The rounded stiles of the chair intersect with a rounded top rail. The black upholstery is original and the coarse seats are filled with horsehair.

American-made around 1830, these chairs were likely selected by Hammond-Harwood House residents Frances and Richard Loockerman before Richard’s untimely death at his Eastern Shore plantation, Bennett’s Toulson, in November 1834. The chairs descended to the Loockermans’ eldest daughter, Hester, and her husband, William Harwood, who lived in the house next. After the death of the Harwoods’ youngest daughter, Hester Ann, the set of six chairs were sold at auction in 1925 and purchased by Mrs. C.F. Marston. In 1977 Mrs. Marston’s daughter Imogen generously donated two of the six to the museum.

Gondola chairs gained popularity in the third decade of the 19th century. Generally these chairs share similar characteristics; they have downward curved arms and a rounded crest with a figured pattern vase splat. The chair is named after the 18th century gondola boats of Venice, Italy, which have a comparable rounded shape.

These side chairs seem to take their form from the Greek “klismos” chair with its outwardly curving back legs. There was a revival of this style chair in the early 19th century  and it likely gave rise to the later Gondola chair form. Klismos chairs were very popular in the 4th century CE, but none survive. The only documentary evidence of these chairs can be found on pottery and sculpture. Greek goddesses Athena and Hera were both depicted seated in Klismos chairs. Later the Romans also admired these chairs and copied the form.

Currently on display in the game room, these chairs likely were used by the family for leisure activities such as cards, writing letters, and sewing. The Loockerman and Harwood households in the mid-19th century were full of inherited antiquities so these more modern chairs were most likely used in a very functional way versus their 18th century counterparts. 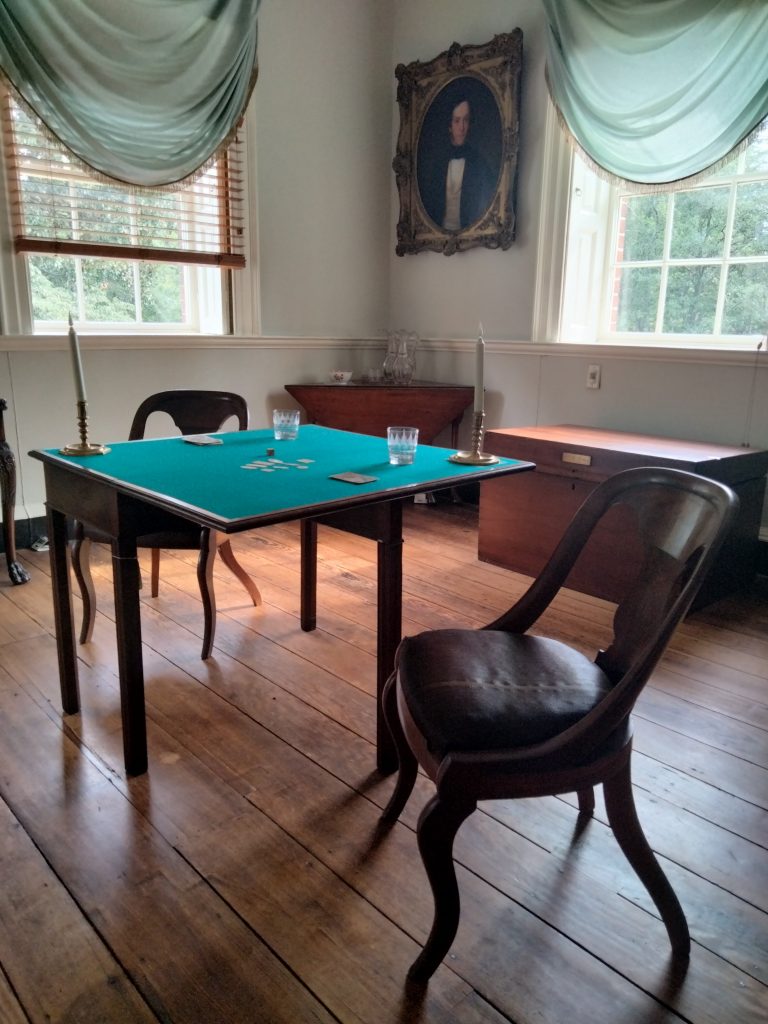 Posted on Sep 10, 2021 in Collections, Item of the Week by Hammond-Harwood House