This London-made silver urn c.1770/71 lies between the rococo and neoclassical styles. The urn reflects its original owner’s own complex identity. Samuel Chase (1741-1811) was a fiery American patriot and signer of the Declaration of Independence. In 1770 Chase was building an elegant Annapolis townhouse and wanted to furnish it extravagantly. This urn was likely one of the items ordered for the new house.

The hallmarks on the urn indicate it was made by a London shop in 1770/71 by Andrew Fogelberg (1732-1815). Fogelberg was born in Sweden about 1732 and came to London in the 1760s. By 1770 he had established his shop in Soho. He made pieces for wealthy, fashionable clients, including the infamous Duchess of Kingston. From 1785 to 1792 Fogelberg trained Paul Storr. Storr became one of England’s most celebrated silversmiths of the early nineteenth century, and he carried on in Fogelberg’s shop after he retired. His firm produced silver for Kings George III and George IV.

The urn features a Townley coat of arms from Chase’s aunt by marriage, Margaret. Margaret was heiress to a great fortune as the only surviving child of Jeremiah Townley, gentleman of London. His connection to nobility was a point of pride for Chase, despite his stance against British rule. Chase was not alone; patriots like Major General William Alexander and even George Washington customized imported items with an English coat of arms. Americans aspiring for status disregarded the rigid rules of British heraldry.

In the end the house in Annapolis proved too costly for Samuel Chase. He sold it to Edward Lloyd IV, who finished the building. Samuel Chase was the uncle of Frances Loockerman, who lived in the Hammond-Harwood House across Maryland Avenue from the Chase-Lloyd house. After Samuel’s death the urn descended in the family of Frances’ brother Richard Moale Chase. 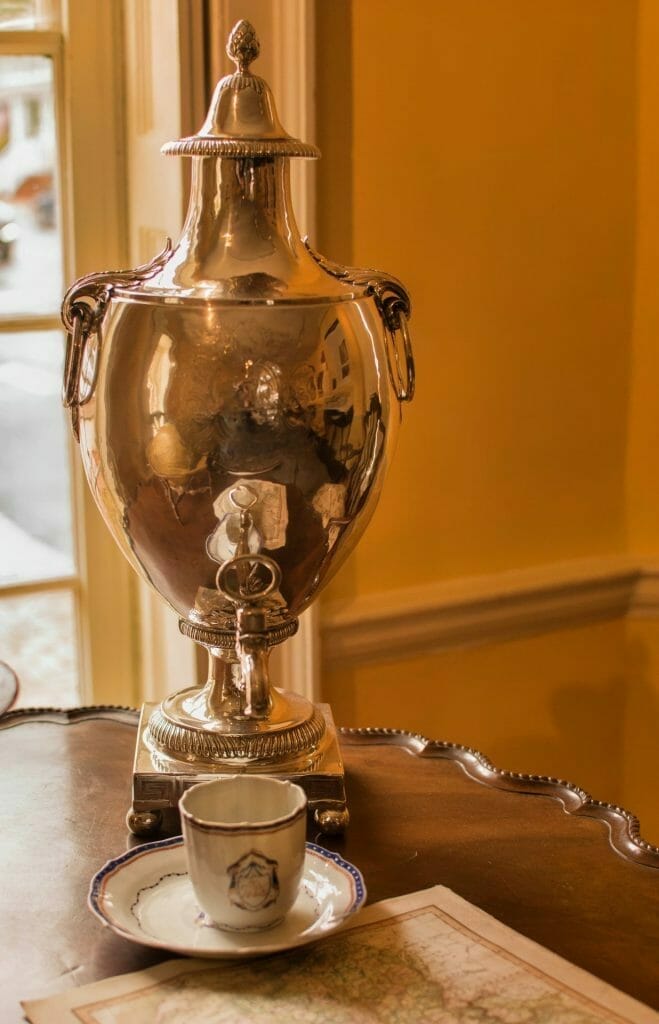 Posted on May 10, 2022 in Collections, Item of the Week by Hammond-Harwood House