Inside the Tall Case Clock

What does it mean to keep time? The Hammond-Harwood House has eight clocks from various periods and our goal is to have them working. They certainly each have different housings, works, and personalities. The latest clock to come back from cleaning and restoration is the Shaw case clock which sits in the beautiful dining room here at the house. The history of the clock is interesting, as the case was made by John Shaw (1745-1829), Annapolis’ most renowned cabinetmaker around 1797, but the clock works are probably from the 1740s.

Looking at our clocks it’s hard to ignore clock fashion because, just like clothing and furniture, clock styles also come in and out of fashion. “Grandfather” or large case clocks were popular until about 1830 and then they virtually disappeared until they popped up again in Europe in the 1890s through the 1920s-30s. The Industrial Revolution certainly played a part in their production. Case clocks died out again until the mass production of them to commemorate the U.S. Bicentennial in 1976 and now they have pretty much disappeared once again.

The Shaw case clock featured this week is original to the Hammond-Harwood House. Working with the horologist (clock repairman) revealed many interesting factoids. The front of the case is made of Cuban mahogany with a pine back and veneers. Mahogany became scarce around 1790 (consider the labor taking down a hardwood in the tropics), so veneer solved some of that issue. Of course, there could have many more inlays—but Shaw’s work was generally created to customer order, which often translated into what the customer could afford.

The pine back of the case reveals “witness marks,” that is, evidence of white paint and holes that indicate the clock had been hung on a chair rail. This would certainly have kept the clock stable and prevented it from tipping. Looking at the fretwork at the top of the clock, there is evidence of hide glue and old repairs—does that mean it might have tipped over? Were the Loockerman children running through the house and caused an incident? Who knows? But hanging the clock would also prevent “sympathetic movement.” This vibration or movement of the clock created by loud noises, or people walking by, affects the stability of the clock’s time keeping. Interestingly, the weights that help regulate the time are lead tubes wrapped in brass. The horologist shared that some New England clocks have sand in the tubes that are wrapped in brass because lead was very expensive. Imagine!

The clock gets wound every eight days, unlike our Lantern clock in the house entryway that has to be wound every eight hours! A key that looks like an old car engine crank is used to wind the clock in two places on the clock face. Then, after I use a gloved hand to carefully set the pendulum going, the gentle tick-tock commences. The clock chimes on the hour and I cannot begin to convey the thrill of hearing our clock chime exactly on the hour in concert with the chimes from the U.S. Naval Academy chapel. Come for a house tour and listen to the clocks for yourself!

Donated by the Gaillard Family, 2007 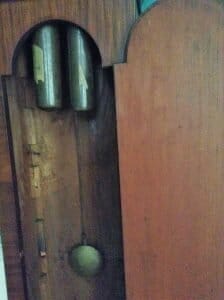 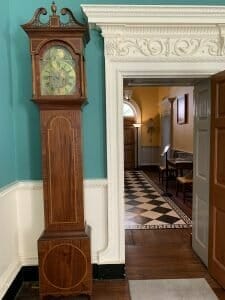 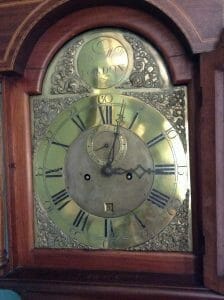 Posted on Sep 29, 2022 in Collections, Item of the Week by Hammond-Harwood House