In 1941 Ethel Miller made an excellent gift to the Hammond-Harwood House Museum of several clocks, in honor of noted antiques specialist Edgar G. Miller Jr. This lantern clock, c. 1650, is the oldest item in the museum’s collection and has been displayed in the entryway of the mansion since the time of its donation.
Lantern clocks were the first devices in England that were used in homes to tell time.  Shaped like a lantern, these clocks are aptly named. The early word for lantern was derived from “laton” or “latten”, which meant brass. The clocks originated on the European continent and were popular in France before England. With the immigration of French Huguenot craftsmen in the early 17th century, the clocks became prevalent in England by the 1620’s; their cost meant they could be purchased by a rising middle class. Initially London was the center of production for lantern clocks but their manufacture quickly spread throughout England. This warranted the start of the clockmaker’s guild established in 1631 by Charles I, which still exists to this day. Before these clocks became available, the majority of the English population depended on sundials and tower clocks in local churches to tell time.
Typical early 17th century lantern clocks were weight driven brass wall clocks that featured only an hour hand. Later clocks produced after 1656 sometimes had a pendulum and a minute hand, allowing for greater accuracy. Many makers of lantern clocks continued to install only the hour hand out of tradition. The clocks fell out of popularity in urban areas by the latter half of the 17th century as technology developed. This clock may possibly have been made by David Bosquet, a French immigrant to London who joined the Blacksmiths Company in 1628. When the clockmakers guild was established, he joined in 1632 as a founding member.
This device has the typical lantern clock form with four pillars, inspired by classical columns of ancient Greece. The dolphin design at the top of the clock is also inspired by early Mediterranean cultures. To the ancient Greeks, the dolphin symbolized rebirth and renewal—which is very appropriate for a clock. To the ancients, these friendly creatures were a sign of leadership and companionship—perhaps because of their tendency to swim in distinct groups with one dolphin as the leader. According to ancient mythology, a dolphin helped Poseidon, god of the sea, woo and win his wife Aquila. So grateful was he for the dolphin’s help that Poseidon honored the animal by placing it in the heavens in a constellation. Clearly, dolphins symbolized a positive connection between humans-friendship and companionship.  Of course, the dolphins on the clock do not look like real-life creatures but are rather stylized interpretations by the artisan, who may have never seen a dolphin. Regardless, this early clock provides a window in time into the development of time keeping in early Europe and time as we now know it.
Maker: Unknown, possibly David Bouquet, French-English (Active 1628-1665)
Medium: Brass and Silvered Steel
F 121 Donated by Ethel Miller in 1941
English, c.1650 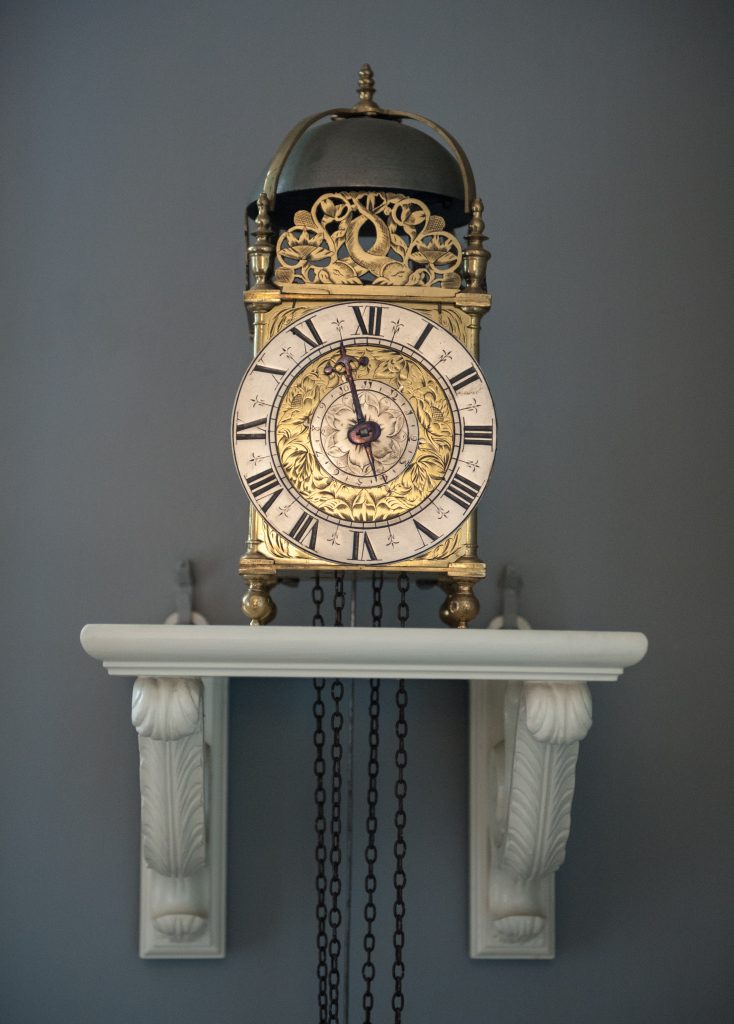 Posted on Oct 4, 2021 in Collections, Item of the Week by Hammond-Harwood House