The story behind an object can transport you to the past, and this ribbon is no exception. Beloved French general the Marquis de Lafayette embarked on a grand American tour, leaving France on July 13 and arriving in New York on August 15, , 1824. His visit was one of the most celebrated public events of the early 19th century. He traveled with his son George Washington Lafayette, named for his late friend and mentor. For Lafayette it was a chance to revisit old friends he had met during the Revolution, strengthen bonds, and make new friends during his many stops from August 1824 to September 1825 to all 24 states in the union. Lafayette was referred to as the “National Guest” and was hailed as a hero who was met with great celebrations in each town he visited.

December 17, 1824 Lafayette and his entourage reached Annapolis and were greeted with a warm welcome at the State House. At the forefront of Lafayette’s Annapolis welcome committee was 76 year old Judge Jeremiah Townley Chase. Chase owned the Hammond-Harwood House, and his daughter and son-in-law Frances and Richard Loockerman lived there.

The festivities featured a parade through West Street, Main Street, and up Francis Street to the State House. He was met there by a semi-circle of girls dressed in white and holding banners that said “Lafayette- The friend of our fathers, will always be welcome to the hearts of their children.” They welcomed him into the rotunda and into the Old Senate Chamber. It is likely that Hester Loockerman, age 17, and her little sister Matilda, age 12, were among these girls as their grandfather, Judge Chase, was head of the welcome committee.

This silk ribbon is thought to have been worn by Judge Jeremiah Townley Chase during the festivities. Across America, ribbons like this were worn to welcome Lafayette, and were kept as souvenirs after. Mayor of Annapolis James Boyle specifically requested “The Members of the Corporation of Annapolis are invited to assemble in the Senate Chamber on Friday morning of the 17th instant as soon as the approach of General LaFayette to the city shall be announced. Each member is requested to furnish himself with a LaFayette Badge.”

The Frenchman’s visit to American sparked a wave of commemorative items with his face– including porcelain, coins, engravings, and even gloves! 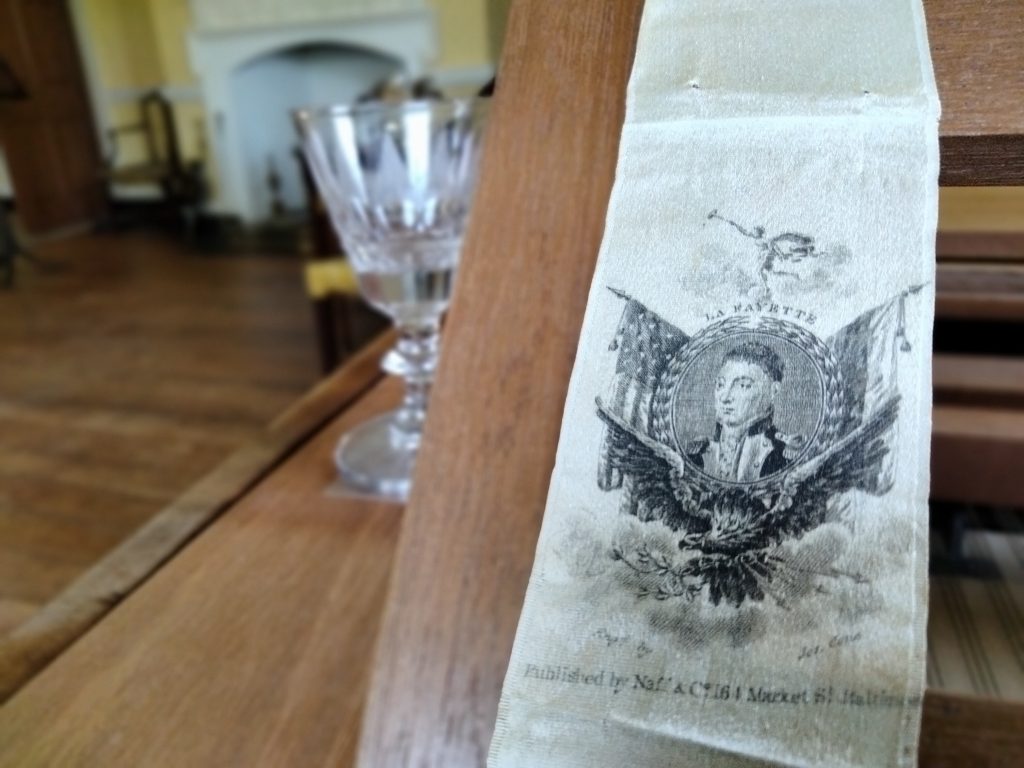 Posted on May 7, 2021 in Collections, Item of the Week by Hammond-Harwood House