Maryland-born artist Charles Willson Peale painted head-size portraits of Thomas Johnson and his wife, Ann, in the fall of 1788 at their home Pleasant Grove about nine miles west of Baltimore. Thomas was the son of Anthony Johnson, who established a chapel in Annapolis.His mother was Katherine Smith; both parents were of Scottish ancestry.
Peale visited Pleasant Grove at the request of the couple’s eldest son, Rinaldo Johnson, who had also commissioned a miniature of himself. Peale recorded his time with the Johnson family in a 1788 diary entry: “Mr. Johnson’s children collected their number ten. 4 girls and 6 boys all grow[n] up almost to women and men—it was a pleasing sight to see them placed at the dinner table in the order they were born…This family have generally continued to meet together once a year, and seem to be very happy and in much brotherly love.”
In an October 1788 letter to his friend Christopher Richmond, Peale describes a funny scene with Mr. Johnson:  “A favorable anecdote for me a painter happened when I painted Mr. Johnson. I placed a looking glass in such a manner as the old gentleman might see the picture while I worked on it, when it was nearly finished he put his hand on his cap, and exclaimed in some surprise that he felt his cap on head & yet that he could not see it, when in fact he only saw the portrait.”
During the time Peale was painting the Johnsons he was also doing portraits of their next door neighbors Benjamin and Eleanor Lamming. The following year Rinaldo married George Mason’s eldest daughter, Ann “Nancy” Eilbeck Mason, on February 4, 1789 at her father’s house Gunston Hall. Gunston Hall’s interiors were designed by William Buckland (1734-1774), architect of the Hammond-Harwood House.
The Johnsons’ youngest son was John Warfield Johnson, who traveled west as a government agent to trade with the Native Americans. He married Tapissee, the daughter of the Saulk Chief Keokuk and they had three daughters. He later was remarried to a woman of St. Louis society and became mayor of that city. After the passing of his parents, John inherited the portraits, and after his death they went to his sister in Baltimore whose descendants later sold them to the museum in 1951.
Artist: Charles Willson Peale  (1741-1827), American
Medium: Oil on Canvas
P2 Museum Purchase in 1951
Baltimore, Maryland, c. 1788 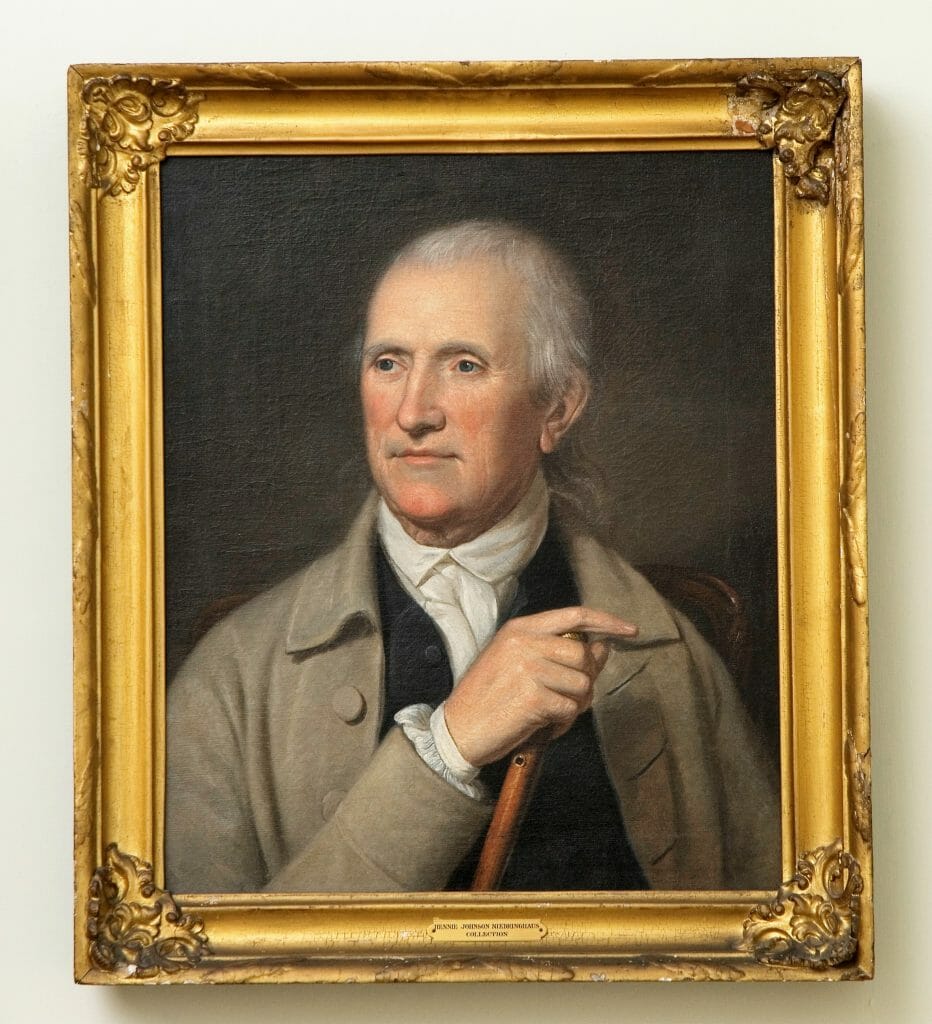 Posted on Oct 14, 2021 in Collections, Item of the Week by Hammond-Harwood House