This plate is made of porcelain, which is a hard paste that was developed by the Chinese over 1,000 years ago. The clay is fired at a very high temperature and takes on a glassy form. This plate features a design with water buffalos, which in Chinese culture symbolize strength, service, and a connection to the earth. This tradition comes from the legend of Lao Tzu who set off on a journey riding a water buffalo when he was discouraged about human nature. Upon arrival at the final gate at the great wall protecting the Kingdom, he was persuaded by the gatekeeper to record his philosophy. This text became the eighty-one sayings of “Tao-Te-Ching,” which is the most widely translated text, second only to the Bible.
The plate is thought to be one of the earliest pieces of Chinese export brought to the state of Maine. The original owner was Nathaniel Barrell (1732-1831), a successful merchant. In 1758 he married Sally Sayward (1738-1805), the only child of the fabulously wealthy merchant Jonathan Sayward (1713-1797). Shortly after their marriage and birth of their first daughter Sally, Nathaniel embarked on a three year business trip to England.  He purchased this set while in England in the 1760’s. He secured an audience with the future King of England and set up strong business ties for his mercantile future; however, he could not have known that upon his return he would find his homeland on the brink of revolution which would disrupt his business aspirations for years to come.
The couple’s eldest daughter, Sally (1759-1855), became the first female author from Maine, writing several gothic novels. She also dabbled in designing pottery. You can learn more about jugs she designed here. The Sayward-Wheeler House c. 1718 is still extant as a historic house museum owned by Historic New England. Original plates from this set are on display there. Next time you are in York, Maine, make sure to check it out, and imagine the Barrell family dining on soup using these plates on a cold winter’s day! 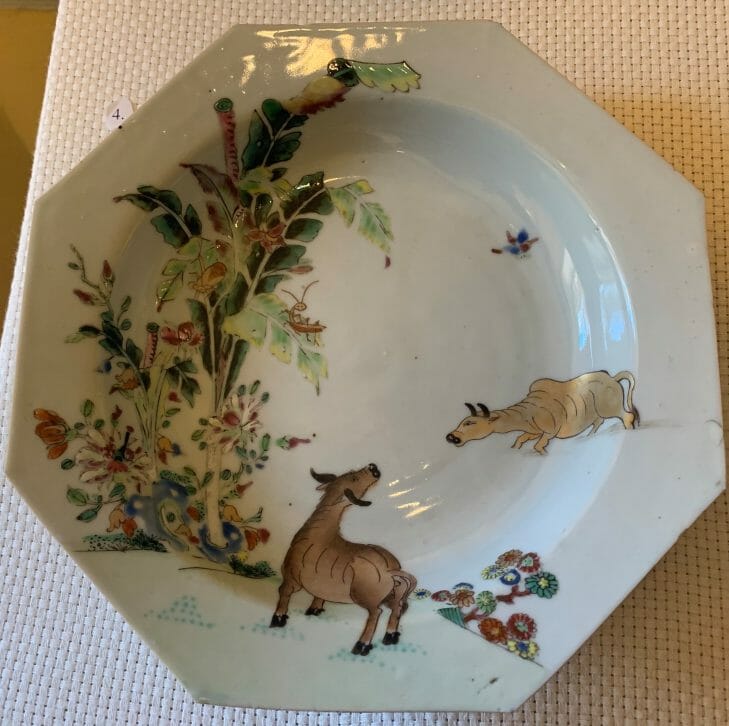 Posted on Jan 29, 2021 in Collections, Item of the Week, Reading List, Resources by Hammond-Harwood House