An elaborately decorated shelf clock in the Hammond-Harwood House collection  has the thought-provoking Latin inscription “Tempus edax rerum,” which translates to “Time the consumer of all things,” on an ivory panel above the dial. Recently, local horologist Stephen Sieracki studied and repaired the clock so it is now working. This is the first clock in a project  to get all nine clocks in the collection in working order.
Sieracki discovered that the piece actually began its life as a watch hutch, which was a holder for pocket watches when they were not in use. Watch hutches date back to 18th century Europe. Some were quite elaborate like this one, which contains exotic woods like ebony and satinwood, while others were simple and utilitarian.
Modifications made when this piece was converted from a watch hutch into a shelf clock included widening the opening for the dial, cutting a hole in the floor of the watch chamber for the pendulum and removing the drawer, and, of course, adding the movement itself as well as decorative designs on the case.
This clock is filled with Masonic imagery. According to Sieracki,  the top is meant to resemble a Masonic temple, and the yellow and black inlay above the classical columns are typical of “Masonic pavement design.” The multiple ovals on the piece he believes may represent the “eye of Providence”, a common Freemason motif. The figures on either side of the clock are both Masonic images, with the anchor figure representing hope. The shield on the back is from the Worshipful Company of Joiners, which was incorporated in London in 1477. A Philadelphia chapter began in 1774 and met at  Carpenters Hall. The building can still be found on historic Chestnut Street Freemasonry in America began in Philadelphia. The carpenters’ group had several Freemason members, including architect Robert Smith, who designed the building as well as the home of fellow Freemason Benjamin Franklin.  A clock like this would certainly have been appreciated in their circles.
During the recent treatment of the piece Sieracki discovered that a previous repairer had signed and dated the spring. The piece says “Esteve Juilliet 1802.” The clock itself is thought to be French-made while the case is thought to be English- made, given the exotic woods used like teak, ivory, rosewood, and satinwood from India and ebony from Africa– all available in the British Empire. The movement is not original to the clock and may have been replaced by later owners, possibly American, who probably did not have the same reservations a European may have had about using a French clock in a British case.
A special thank you for this post goes out to horologist Steve Sieracki and furniture consultant Tony Zecca.
Country of Origin: The case is probably English (the movement is French)
Maker: (unknown) (The case and movement are by different makers)
Date: 1770–1800
Medium: Bone, Ebony, Satinwood, Mahogany, Steel, Brass, Mother of Pearl, Ivory, Rosewood,
Teak, secondary wood, probably Oak.
F122 Donated by Ethel Miller from the estate of her later brother Edgar G. Miller in 1941. 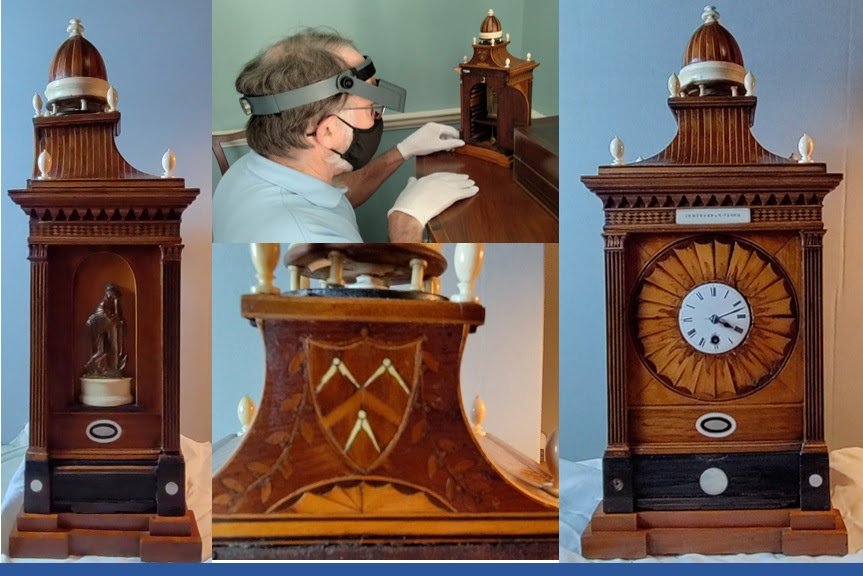 Posted on Aug 28, 2021 in Collections, Item of the Week by Hammond-Harwood House