Relatively few furniture objects have kept the same design over the course of history. The chair is that exception– with the basic form remaining similar since inception. Naturally, the material, construction, embellishments, and the cultural associations with these objects changed and reflected the period in which they were made. This chair has a shield back modeled after the plates of British designer George Hepplewhite (1727-1786), and have four back splats– fluted and carved. The front legs are square with tapered fluting and spade feet.

This particular chair provides insight into the taste of early Americans in the foundational years after the American Revolution when preferences shifted to the neoclassical style. The chair is attributed to New York City Quaker Cabinetmaker, Thomas Burling (1746-1831).

Burling was a very well-known cabinetmaker who was active in New York City from 1769 until 1802, when his sons took over the business. Beginning in the late 1780’s Burling started to receive federal commissions from the newly formed American government, including furnishing Federal Hall in New York City, the nation’s first seat of government under the constitution (1789-1790). Originally built in 1703 as City Hall, the building was later remolded in 1788 by Pierre Charles L’Enfant in the emerging classical style and renamed Federal Hall in 1789. L’Enfant’s designs on the building included laurel wreaths, classical columns, and eagles. L’Enfant would later go on to design Washington D.C. in 1791.  Federal Hall had a dramatic impact on the emerging Federal style in America, influencing everything from architecture to furniture, like the pieces made in Burling’s shop on Beekman Street. In addition to his furniture made for Federal House, Burling also gained notoriety with private custom orders for George Washington and Thomas Jefferson just to name a few. Burling’s furniture can still be found today at Mount Vernon, Monticello, and Clermont, home of Robert Livingston, who gave the first oath of office to Washington in 1789.

This piece is original to the Hammond-Harwood House. It was sold at auction to Mrs. Howard G. Duvall from the estate of the last private owner Hester Harwood in 1925. It was then purchased by the museum in 1956 from Mrs. Duvall’s daughter Sidney S. Zell. The chairs were likely originally owned by Judge Jeremiah Townley Chase (1748-1828), and given to his daughter Frances Townley Chase Loockerman after she moved into the Hammond-Harwood House in 1811. Chase oversaw the well-being of his daughter and her family. His 1828 inventory reflects only one easy chair, 18 “gilt fancy” chairs, and 18 Windsor chairs that were typical in the early 19th century, showing he disposed of earlier furniture to keep contemporary with the times. 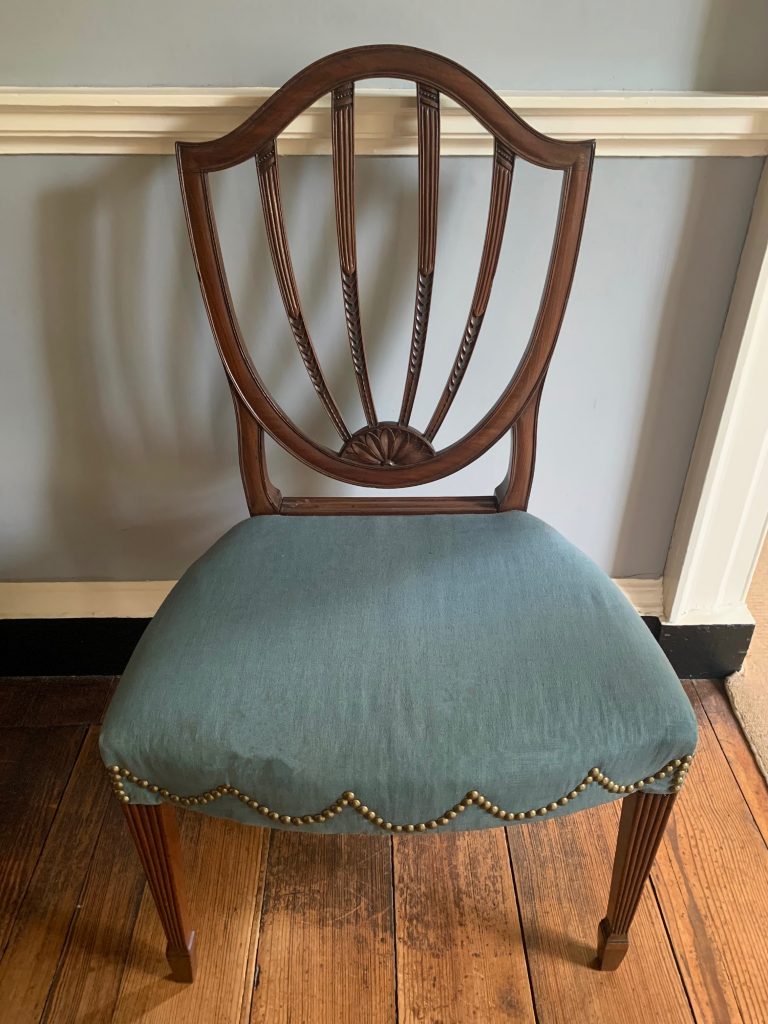 Posted on Jul 29, 2021 in Collections, Item of the Week by Hammond-Harwood House