This aesthetically interesting chair was made by premier Annapolis cabinetmaker John Shaw in the early years of the nineteenth century. Shaw may have designed the piece to appeal to patriotic American citizens. The chair contains two eagle heads, on a shield back, in the style of George Hepplewhite. The two eagles in the shield are reminiscent of the Great Seal of the United States, which contains one eagle, and traditional European armorial displays, which often contain animals. The carved heads and inlaid eyes make for a striking appearance. While the majority of inlay in early America was imported from Britain, however, there are several examples of Maryland cabinetmakers, like prolific Baltimore inlay maker Thomas Barrett, who kept a detailed account book that reveals he supplied inlay for several fellow cabinetmakers like Levin Tarr.

The style of chair was apparently popular in Annapolis. A set of chairs like this one were made for the Magruder family, with an extant example at Winterthur Museum in Delaware. Maryland Governor Robert Bowie, who took office in 1802, also had a set of twelve of these chairs in the Governor’s mansion. The set was broken up and one is now at the Metropolitan Museum of Art.

The two chairs at Hammond-Harwood House may have been owned by Governor Bowie, as they are identical. In 1817 Richard Loockerman, who lived at the Hammond-Harwood House, was elected state auditor. In this capacity he oversaw expenditures for furniture, repairs, and updates to government buildings. He was in frequent correspondence with John Shaw, who acted as undertaker of the State House (the “undertaker” was the one whose duty was to attend to the day-to-day functioning of the building). If any of the chairs remained at the Governor’s house, and furnishing updates were made, it is possible Loockerman may have acquired them at this time or he may have bought another set from Shaw. Regardless, we know these chairs are original to the house as they were bought by the donor, Mrs. Sayles, at the 1925 Harwood auction, after the death of Richard Loockerman’s granddaughter Hester Harwood in 1924.

Shaw’s eagle chairs have a timeless appeal and it is easy to see why they were so desired for the early nineteenth century Annapolis home. 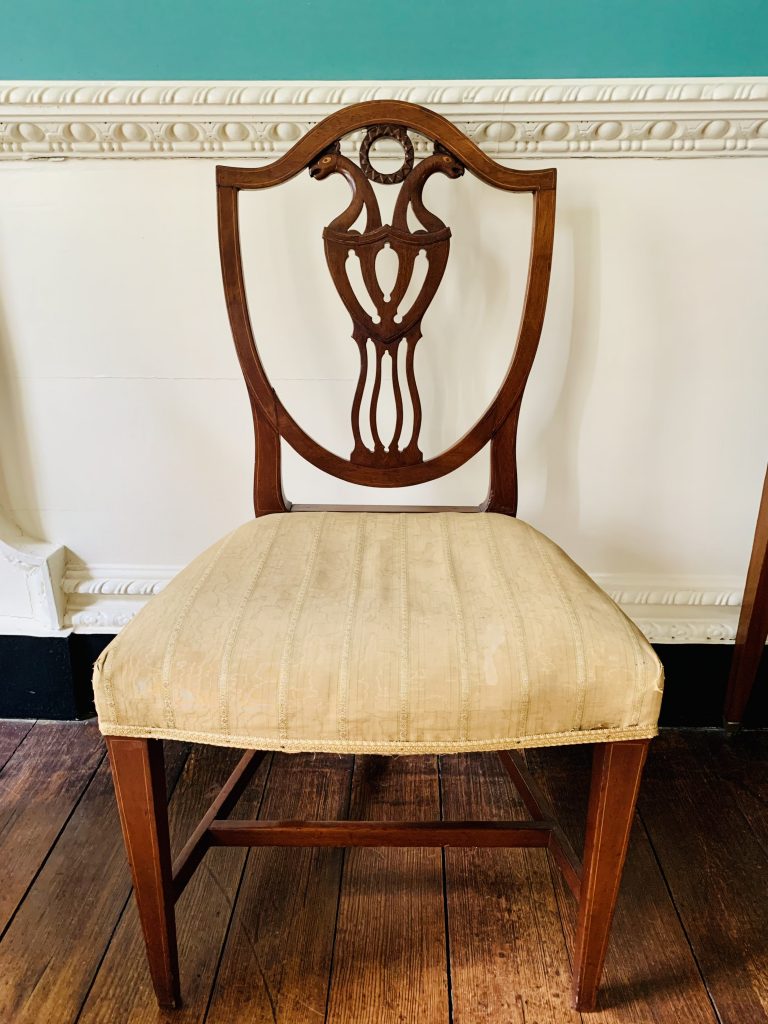 Posted on Mar 26, 2021 in Collections, Item of the Week by Hammond-Harwood House