Silhouettes, also known as profiles, were the most common and inexpensive way to capture a person’s image in the years following the Revolution. By the early 19th century a likeness in silhouette form was displayed in almost every household. This silhouette of Catharine Randall was completed as the medium was quickly falling out of fashion in favor of photography.
Profile cutter Auguste Edouart arrived from France to America in the pivotal year of 1839, when the first form of photography was developed. Clever Edouart incorporated personal elements and backdrops to cater to Americans’ demand for more personalization.  Catharine’s silhouette features her harp. A similar piece by Edouart of Elizabeth Francis of Philadelphia with her harp is in the collection of the Metropolitan Museum of Art. Edouart stayed in America for ten years and produced hundreds of detailed silhouettes, including people from diverse backgrounds such as Chinese teacher Chin Sung and enslaved servant Dalmany.
Catharine‘s father, William Wirt, was US Attorney General and her mother, Elizabeth Washington Gamble Wirt, was the noted author of Flora’s Dictionary, which enlightened an American audience on the use of floral arrangements.
After a long courtship Catharine married Alexander Randall in 1841. We believe that Catharine and Alexander each had a silhouette done by Edouart upon their marriage. Alexander Randall was a son of John and Deborah Randall. John Randall was an apprentice to William Buckland, architect of the Hammond-Harwood House. After Buckland’s untimely death in 1774, John Randall helped complete the house as we see it today.
Alexander Randall became one of the city’s leading citizens and was Maryland‘s Attorney General after the Civil War. In the museum we have quite a collection of Catharine‘s musical items including her harp, music stand, and music book in addition to this silhouette. To learn more about the Randall family you can read excerpts from Alexander’s diary here. 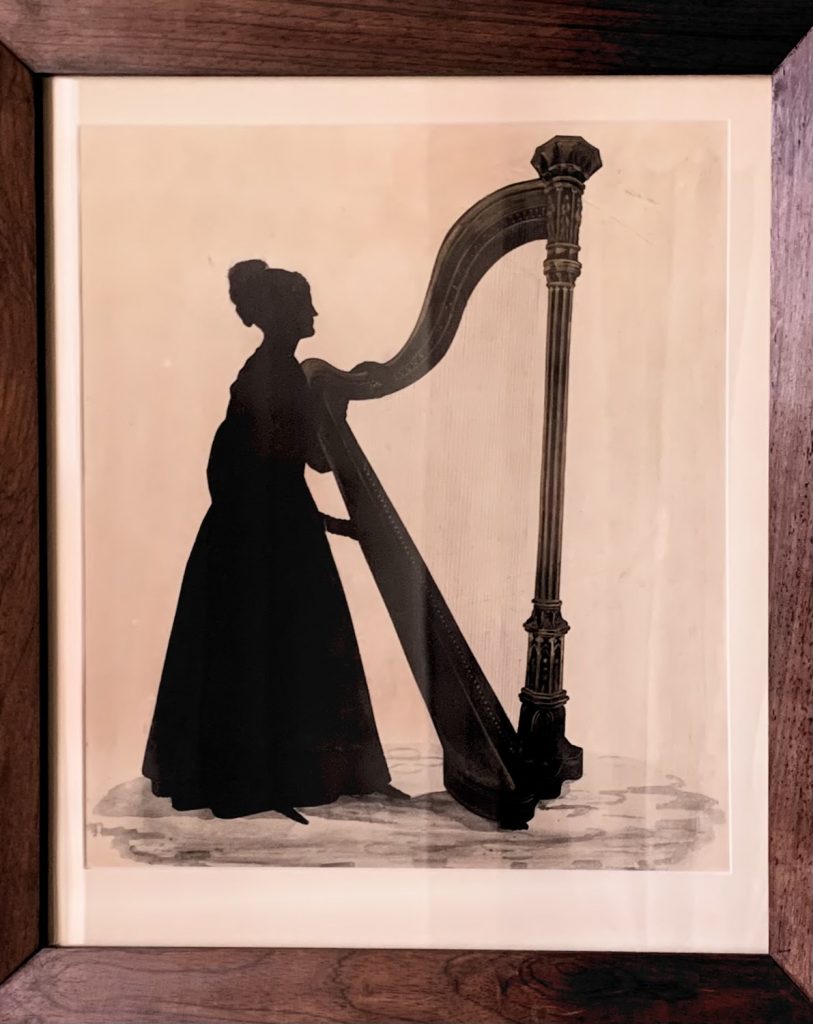 Posted on Jan 15, 2021 in Collections, Item of the Week, Reading List, Resources by Hammond-Harwood House