Have you ever watched or read a historic drama that reflected the contemporary period in which it was made rather than the historic era it is set in? That is certainly the case with this interesting engraving affectionately known as Lady Washington’s Reception Day.

The original painting was done in 1861 during the American Civil War by Daniel Huntington (1816-1906) and is now in the collection of the Brooklyn Museum.  When the country was being torn apart by the Civil War, this image was meant to be a tool to unite the country and pay homage to the states’ common origin. The romantic, idealized scene depicts an evening reception with dignitaries to honor Martha Washington set in  May of 1789 in Philadelphia, about a month after George Washington’s Presidential Inauguration. The very grand surroundings are reminiscent of an elaborate European house. Mrs. Washington was referred to as Lady Washington in the work, which is a title found in the British peerage generally given by birth or marriage. In this instance the title of “lady” is meant to honor her.

Huntington was a well-known painter in his time, president of the National Academy of Design, and vice president of the Metropolitan Museum of Art. He is associated with the Hudson River School of painters. Later prints such as this one were created by Scottish-born engraver Alexander Hay Ritchie who was based in New York. Ritchie was commissioned to make this print for the rising American consumer market.

Large engravings of scenes from American history, such as this one, were immensely popular in white middle and upper class American homes in the mid-19th century. These pieces provide an interesting window into time and show how that demographic viewed their nation’s early history. The piece includes numerous people who visited Annapolis as well as resident Charles Carroll of Carrollton. When you visit the Hammond-Harwood House you can see this engraving in the second floor Study Chamber. The names of everyone shown in the scene are printed at the engraving’s bottom margin. 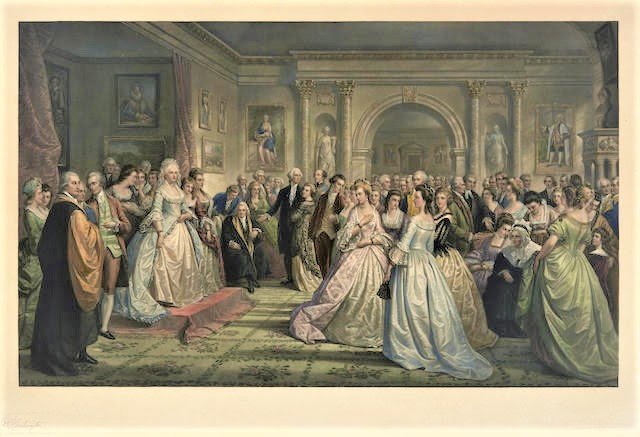 Posted on Jul 16, 2021 in Collections, Item of the Week by Hammond-Harwood House