This English-made cotton quilt dates tothe second decade of the 19th century and belonged to the Loockerman family who lived in the house. The quilt was likely witness to important family events like the birth of the youngest Loockerman child, Catherine, in 1822. The quilt later belonged to the Loockerman’s eldest daughter, Hester, who married William Harwood in 1834. Hester was the only Loockerman child to marry and have children. The quilt was in the house when the last private owner, Hester Harwood, granddaughter of the Loockermans, passed away in 1924. It was sold at auction the following year to the family of the donor, Mrs. Moss, and donated back to the museum in 1985.

In the late 18th century England was undergoing a transformation, creating mills in the north of the country that produced durable cotton products. These English mills had men, women, and children working in hazardous conditions with long hours. To learn more about the British cotton industry click here. Cotton used in English products was mainly grown by enslaved laborers in the American south and in the West Indies. England’s reliance on American cotton would  later cause trouble (raise conflicts) for the textile industry when Civil War blockades prevented cotton from reaching English mills.

Although initially  this piece might appear  plain, the quilt contains very intricate designs. This quilt was machine-loomed and hand-hemmed at the ends. It is two layers, and the underside is padded, which allows for puffy decorative designs to be created on the top. The style is known as trapunto, which is from the Italian word “to quilt.” This method was created in Italy prior to the 14th century. The outer border of the quilt has scrolled stems with geometric flowers in adjacent positioning, the interior border has scrolled flowers and leaves, and the center design is a stylized palm tree.

The quilt was conserved in 2018 by Museum Textile Services in Massachusetts, and is now on view in the Study Chamber on a bed, also original to the Loockerman family. To learn more about the conservation of the quilt click here. 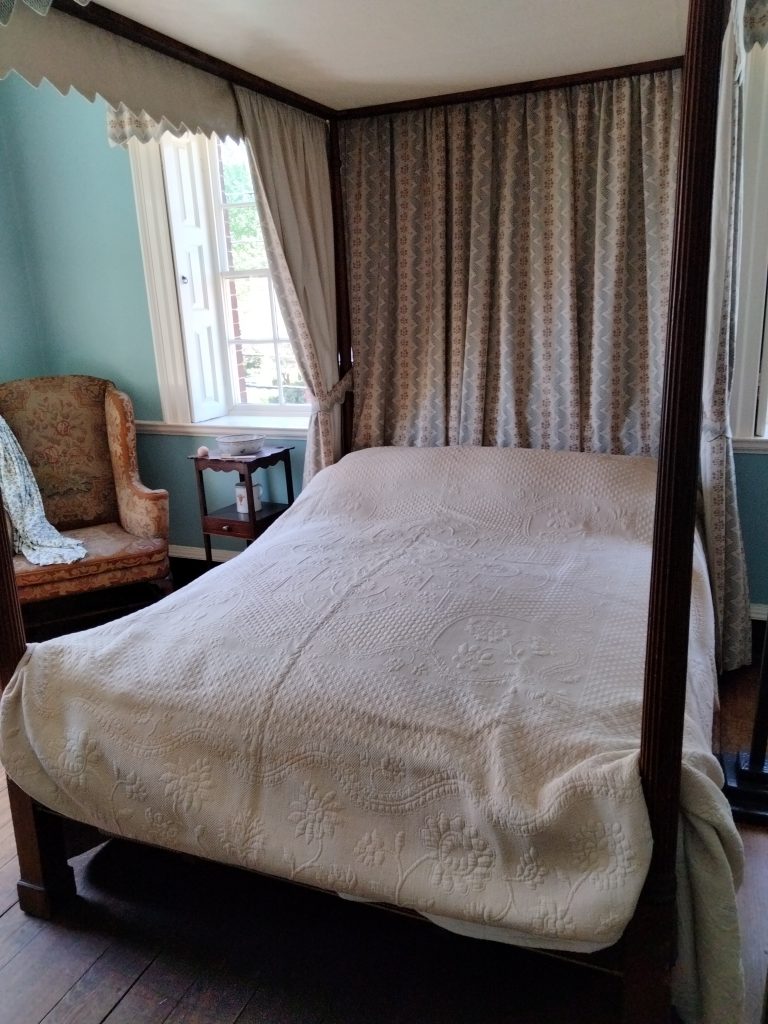 Posted on Apr 12, 2021 in Collections, Item of the Week by Hammond-Harwood House