At the Hammond-Harwood House is a delightful 18th century English watercolor box bearing the label of William Reeves. The box is mahogany inlaid with satinwood. In the drawer are six of the original fifteen china mixing dishes, three drawing quills, a metal holder for chalk and crayon, and a white crayon pencil. The top holds spaces for twenty-four watercolors in cakes. The box contains several small packages of powdered pigment labelled by an early 19th century owner, a Miss Isby, who obviously took her painting seriously, as there are two transcribed pages of “Mr. Derby’s” and “Miss Derby’s” Method of Coloring from 1830 that came with the piece when it was purchased in 1963. Many of these step-by-step instructions for painting a portrait in miniature could be of use to an art student even today.

Inside the box lid is a large and elaborate engraved label of William Reeves of London. William and his brother Thomas were partners initially. However, a quarrel in 1784 caused the dissolution of their partnership, and William moved to the Strand. The brothers each claimed to be the original inventor of the cake watercolor. William’s advertisement in 1784 asserts that “his colors is no copy but the Original Inventor.” While each of the two rival brothers warned artists and amateurs not to deal with the other, the equally argumentative George Blackman advertised that he was the husband of William Reeves’ daughter, and offered to undersell his father-in-law by twenty percent!

An unusual misadventure which befell Thomas Reeves was recorded in the Morning Herald on October 12, 1790: “Yesterday an overdrove ox ran into the shop of Mr. Reeves, Colourman to Her Majesty, Holborn Bridge; broke the windows of the shop and knocked down near the whole of the colors and stock; he was at last secured and taken to the slaughterhouse. He tossed two women in Holborn and bruised them in so dreadful a manner that they were conveyed to a hospital without hopes of recovery.”

It is possible that a box like the one now in the Hammond-Harwood House would have found its way to Annapolis in the years soon after the Revolution when ships from England once more brought their cargo. Elegant and functional items like this were imported for the Annapolis market and attracted girls like sixteen-year-old Mary Steele, niece of Maryland Governor Edward Lloyd V, who attended Miss Keets’ Academy for young ladies in Annapolis in 1805. An oil on canvas landscape c.1805 by Mary hangs above the watercolor set in the North East Bedchamber. A similar watercolor set by Thomas Reeves was given to Nelly Custis by George Washington in 1793. 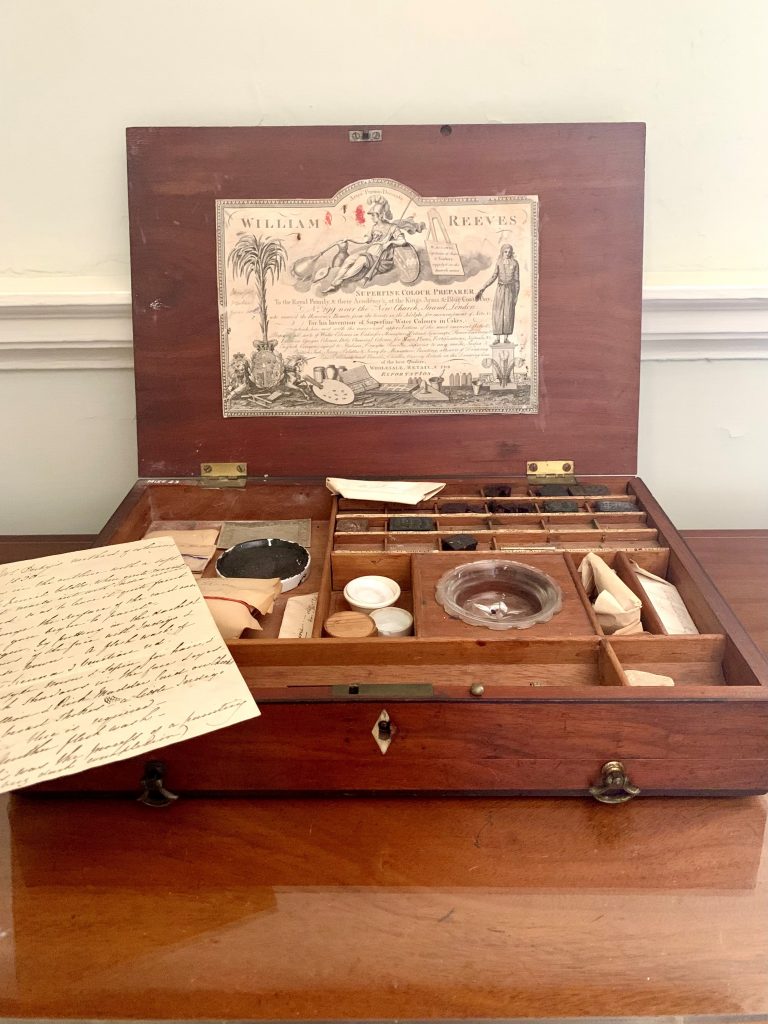 Posted on Jul 23, 2021 in Collections, Item of the Week by Hammond-Harwood House