Many modern enthusiasts appreciate a good round of cards as much as the early American colonists. How did card playing become popular? According to some internet accounts, the earliest playing cards to reach America were brought by the inveterate gamblers in Christopher Columbus’ crew. Since Annapolis was a party town in the latter part of the 18th century, it seems that a rousing game of cards and gambling was an acceptable form of entertainment—if one could afford, what could be, an expensive endeavor. Card games could have taken place at the Hammond-Harwood House. That doesn’t mean that early games of whist, piquet, loo, put, and all-fours, did not escape moral scrutiny.

A Plymouth Colony record of 1633 describes how cards found their way into Puritan New England and several persons were fined two pounds each for card-playing. Nearly 25 years later, a Plymouth Colony law fixed the penalty for card-playing at forty shillings for adults; children and servants ‘to bee corrected att the discretion of theire parents or masters and for the second offence to bee publickly whipt.’ Elsewhere, in New Amsterdam, it was announced that playing cards during the “time of the divine service is prohibited.”
So, where did these cards come from? Playing cards of the pre-revolutionary period were printed in England and shipped to the Colonies. They were, no doubt, heavily taxed by the Crown. Some of these early decks were created with British pasteboards, a thin type of paper board made by pasting layers together. There seems to be little difference in quality between the early American domestic product and those imported from England, according to auction houses who specialize in playing cards.

Since local manufacturing was limited, the American cards were most likely produced following the Revolution in 1776 with printers in Boston, New York, and Philadelphia. Around 1793 Jazaniah Ford started peddling his cards, followed by his brothers, and later, Charles Bartlett, Henry Hart, Caleb Bartlett, Samuel Hart, and other competitors. The earliest examples of playing cards are rare because, besides their heavy use by being handled, the production is difficult since it requires special paper and coatings, as well as the capacity to include color printing. The real distinction between the British and American products seems to be in design. The motifs changed with the American “aces of spades,” which were more decorative than the standard English duty “aces” and the English Royal crown was replaced by the American eagle and other patriotic symbols. Initially the cards were printed with blank backs, but by the early 1800s printers started using designs from European artists, as seen in the cards from our Hammond-Harwood House collection, which includes Caleb Bartlett’s signature. What we consider today as the “standard” deck of 52 cards with spades, clubs, hearts, and diamonds, dates to this period.

Caleb Bartlett, the printer of the card games in our collection, was located in the Bowery in New York City around 1822. As can be seen in the ad, Bartlett printed and published a series of his own books at “The Bowery Circulating Library” which included playing cards, almanacs, and fancy papers. In the 1820s Caleb was joined by Richard Bartlett (who might have been his son) and a 12-year-old clerk from Long Island, Samuel Raynor. Richard and Samuel eventually took over the business from Caleb, producing wholesale and retail items.

The irony is not lost on the fact that card playing is, of course, competitive, but the manufacturers were also competitive. According to the archives at Princeton University, variations on the “ace of spades” cards appeared as companies sought to create their own designs that included the printer’s information. Marked cards published by these printers, including Caleb Bartlett, appeared as early as the 1840s and 1850s. These were considered by some to be “illegal” gambling decks, so other card makers began to omit their name from the ace of spades. The first “joker” card was added in 1863 by Samuel Hart—the same printer who added the indices in the corner of his cards. More standards and designs were added over time and there remains professional and personal discrimination about what makes a good playing card. Just as in the days of the Puritan settlers, card playing has remained a controversial subject which is no longer restricted to the game room of a private home or the local tavern. I’m sure our early ancestors never anticipated online games that continue their early form of entertainment. Cards, anyone? 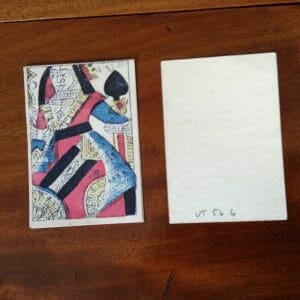 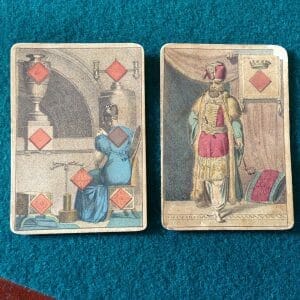 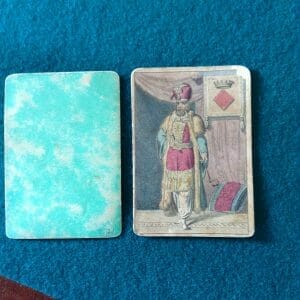 Posted on Nov 10, 2022 in Collections, Item of the Week by Hammond-Harwood House