William was the son of loyalist merchant Jonathan Pinkney of Annapolis. However, he was aligned with patriot interests like his brother Ninian Pinkney, who lived in the Hammond-Harwood House from 1806-1811. William attended St. John’s College and then studied law with Samuel Chase, a signer of the Declaration of Independence. He was elected as a Maryland State delegate in 1788. William married Anna Maria Rodgers in 1789 and the couple had nine children. From 1795 to 1800, he served as mayor of Annapolis. He went on to become attorney general of Maryland in 1805-06. William then was appointed co-minister to the Court of St. James in 1806-7 with James Monroe. During his time abroad William was in frequent correspondence with his brother Ninian and sister-in-law Amelia when they were living at the Hammond-Harwood House. In one letter to his brother Ninian, William says:

“I am half inclined to envy you the smooth, even tenor of your life. You are every way happy-at home, abroad. Nothing disturbs your tranquility farther than to show you the value of it. Beloved by your family, respected and esteemed everywhere.”

William returned home, but did not have the quiet life he envied. He served in the Maryland State senate in 1811 and shortly after became a Major in the army during the War of 1812, and was wounded during the battle of Bladensburg. After the war he served as a minister to Russia from 1816 to 1818 with special missions to Naples. He was elected a US senator and served from 1819 until his death in 1822.

One of his sons, Edward Coote Pinkney (1802-1828), was an accomplished poet and was even praised by Edgar Allan Poe, who seldom offered kind words to contemporaries.

Little is known about the artist Bouche other than that he was a French-born painter and teacher. He ran a painting school in Baltimore in 1795. A painting believed to be the artist’s wife can be seen online; it is now in the collection of the Museum of Early Southern Decorative Arts. 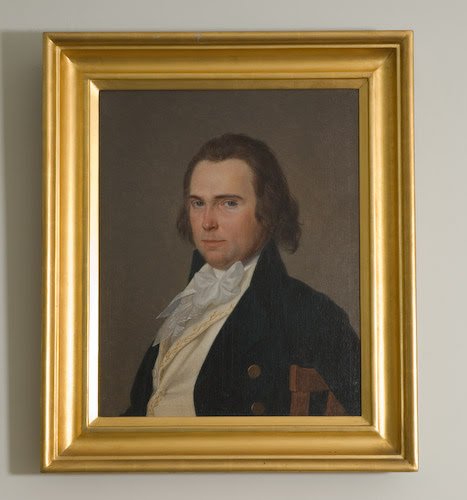 Posted on Dec 11, 2020 in Collections, Item of the Week, Reading List, Resources by Hammond-Harwood House