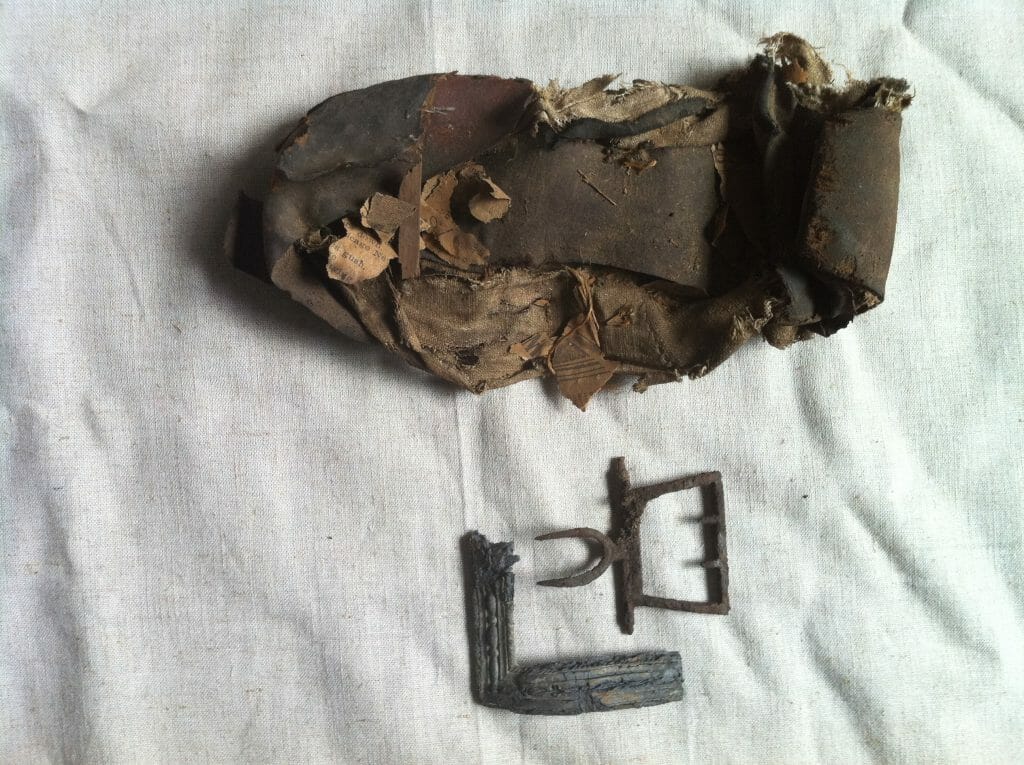 The Hammond-Harwood House has three attics, one over the main block and one over each of the wings. Attics are always places of mystery and those at Hammond-Harwood House are no exception. Fifteen years ago as contractors were beginning work to replace the roof of the kitchen wing at the house, they were clearing out the area around the eaves near the back of the attic. A structural engineer had identified some issues with the attic framing that needed to be addressed before the old slate roof was removed and the new roof installed. The contractors glimpsed something square and metallic tucked up in an eave. They almost pulled it out along with other debris but called the curator and director to take a look. It was a buckle with a small black leather shoe about eight inches long, obviously very old. The shoe was carefully removed and placed with other items of interest that had been found in the attics.

The first theories about the history of this shoe revolved around the enslaved people at Hammond-Harwood House early in the 19th century. Could the shoe have belonged to an enslaved female at the house? How did it wind up hidden under an eave in the attic over the kitchen wing? A likely story emerged: Hiding shoes near entry or exit spots in a house in order to ward off evil spirits and prevent them from entering the house was a practice seen in both European and African American traditions. The most logical place for the enslaved individuals at Hammond-Harwood House to have lived, slept and socialized with one another was in the rooms above the kitchen, where access to the wing’s attic was easy. Hiding the shoe would have been an action harkening back to remembered or passed down traditions.

The practice of “shoe concealment” is a hot topic of research in Britain; the Northampton Museum even has an index of concealed shoe findings with almost 3000 entries (note 1). Ethnologists who have studied various superstitions and traditions cite a number of possible reasons for hiding shoes: shoes will bring good luck; shoes, because they take on the shape of the wearer’s foot, are symbols for an individual who the concealer wants power over, wants to leave the building, or wants to come back to the building; hidden shoes ward off evil spirits or provide protection (note 2). Shoes, either singly or in pairs, either whole or in pieces like the tongue or sole, were concealed in attics, in gaps of chimneys,and between walls. They were also buried by stairs or entryways.

Historian Ceri Houlbrook from the University of Hertfordshire said, of the British practices, “In earlier centuries, it might have been about protection from witches or the devil, one theory proposes that the shoes were intended to act as lures for witches, spirits, and other supernatural threats.” (note 3) Closer to home, Matthew Cochran and Jeanne Ward wrote in the Maryland Archeology Month newsletter, “This well-documented practice dates from the l5th to the early 20th century. The underlying premise of using concealed shoes as a means of personal or household protection lies both in the shoe’s shape as well as the personal qualities imbued in a shoe by the wearer. Shoes take on the literal shape of the wearer and therefore can act as a form of proxy for the wearer. If a malicious entity is presumed to be haunting you, the concealment of the shoe in a relatively inaccessible space, such as the cellar or the attic, may draw the malicious entity to the shoe instead of you. And, if luck holds, the malicious entity may become trapped in the shoe.”(Note 4)

Some scholars who have studied African American traditions and superstitions note that there is little evidence for concealed shoe traditions in Africa; they think rather that the practice of concealing shoes by African Americans in the south and mid-Atlantic during the early to mid-19th century may have derived from the British usages (note 5). Early American carpenters and masons, who were often of British heritage, hid shoes for good luck and prosperity when they were building houses. But enslaved men and women held superstitions about shoes as well (note 6), and these ideas may have been overlaid on the British practices.

The shoemakers at Colonial Williamsburg analyzed a photograph of the Hammond-Harwood House shoe and the buckle. This is what they had to say:
“On the buckle, the chape [the metal pin of the buckle] could date from the 1760’s to 1770’s and the rim (looks to be high lead pewter) may date from the 1770’s to 1780’s. The rim and the chape may not go together. On the shoe, with the toe shape, it could date from 1835 to 1855. It is a woman’s black leather calfskin shoe, with a long open throat like what you see on women’s Grecian style footwear popular in the 19th century. It had a silk bound edge, a whip stitched linen lining and a whip stitched side lining. If the upper is entirely hand sewn it could date earlier, while if there is some machine sewing it would date later, possibly the 1850’s to 1860’s.” A shoe of this style may not have been worn originally by one of the enslaved women at Hammond-Harwood House; it could have been passed down from one of the female slaveholders, possibly Frances Loockerman, or it could have been discarded as worn out and kept by one of the enslaved workers.

Other houses in and near Annapolis also contained shoes hidden in their attics; several were found at the ca.1740 Jonas Green House on Charles Street. Similarly, a mismatched pair of men’s shoes and a horseshoe were discovered under a cellar stair tread at Cloverfields in Queen Anne’s County on the Eastern Shore. (note 7)

The attic shoe is currently on display in the new exhibit “Slavery at Hammond-Harwood.” Several factors indicate an enslaved person hid the shoe in the eaves of the attic. First, it is a woman’s shoe, by its size and style. The shoes placed by carpenters and masons were typically men’s footwear. Second, the location of its concealment was within the part of the house where the enslaved lived and was accessible to them. If this shoe is indeed an African American charm to ensure luck or ward off evil, it is one of the very few artifacts that can be traced to the enslaved men, women, and children who lived and worked at the house for decades in the early 19th century.

Posted on May 15, 2020 in Collections, History, Resources by Hammond-Harwood House