On this Juneteenth, let’s recognize and celebrate Moses Williams, an early Black artist, and his influence on our perceptions of race and culture in America. As the maker of thousands of silhouettes for Americans in the merchant and gentry classes, Williams personified both the reach and the limitations of Black artisanship in the late 18th and early 19th century.

Moses Williams was born in 1777 to a mixed-race couple, Scarborough and Lucy. His parents were enslaved in the household of Charles Willson Peale, the eminent portrait painter who began his career in Annapolis before moving to Philadelphia in 1776. Scarborough and Lucy may have been given to Peale in payment for a portrait – no record of their origin has been found. In 1786 Peale manumitted Scarborough and Lucy under a new Pennsylvania law that freed those enslaved who were over the age of 28, but Moses, being only eleven years old, did not qualify for freedom. His life then continued to be bound with the Peales as he grew up apart from his parents and alongside (but definitely not on equal terms with) the many Peale children.

Charles Willson Peale led a busy life, painting portraits on commission and working to establish his museum. Everyone pitched in; his children were instructed in various arts, including painting, but also taxidermy and natural science. Moses helped out with a variety of tasks. He took an immediate interest in the physionotrace, a mechanical device that enabled a sitter’s silhouette to be drawn. He developed a proficiency at cutting the silhouettes and drawing in ink the final delicate touches on them that gave each a distinctive individuality.

The scholar Gwendolyn DuBois Shaw, in the article “Moses Williams, Cutter of Profiles”: Silhouettes and African American Identity in the  Early Republic” (https://web.archive.org/web/20150814041503/http://www.amphilsoc.org/sites/default/files/proceedings/490102ed.pdf), points out the significance of Moses Williams being taught to make black and white images using a mechanical  device, while Peale’s sons and daughters were instructed in the “higher art” of painting in glorious color. He would never be in competition with Raphaelle, Rembrandt, Titian, or any of the Peale artist sons. His work, like himself, remained always “other.”

Williams was stationed in the museum with the silhouette-making device and became quite an attraction for visitors – it’s estimated he drew and cut more than 8000, which were sold for eight cents apiece. He was so successful that Peale granted him his freedom a year early – at age 27 rather than 28. Moses took the name Willaims in recognition of his relation to the Charles Willson Peale family. He was able to purchase a house and to marry the Peale’s white cook, who previously would not sit at table with him. When the couple’s daughter was born, Peale noted the birth along with that of his own grandchildren in a letter.

But Moses Williams would always be “other” to Peale, to those whose images he created in black and white, and to the emerging world of American art. He was not recognized as the silhouette artist until the 1990s. A telling example of how Peale thought of and treated Moses Williams is detailed in several accounts: Peale had Williams dress up as a Native American in order to advertise the wonders of the museum. There’s speculation that he posed for the painting by Rembrandt Peale titled Man in a Feathered Helmet, a portrait of a supposed Native American. This type of treatment effectively negates Moses Williams’ identity as the artist who creates silhouette portraits.

Unfortunately, the popularity of silhouettes waned in the early 1820s. Moses Williams lost his career and was forced to sell his house. Without any other means of making a living, he spent the remainder of his life unrecognized as an artist and in poverty.

Hammond-Harwood House purchased one of Moses Williams’ silhouettes in 2019. A delicate rendering of a woman in profile, it is on display in the museum along with other items illustrating the lives of the enslaved. It is, however, the only piece of art by an African American in the collection currently. 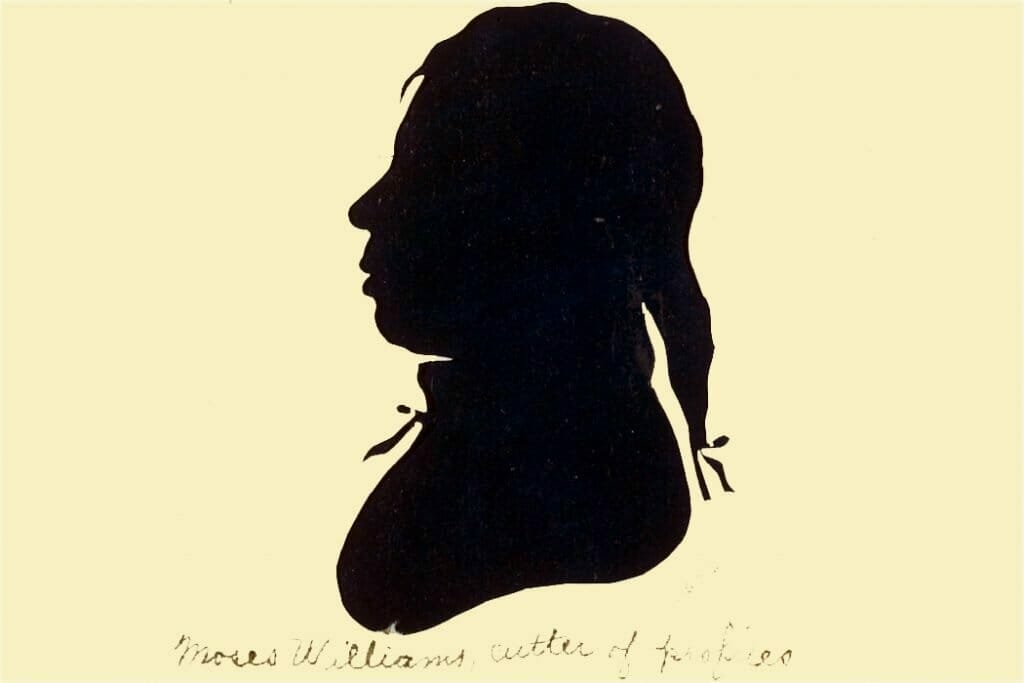